New Horizons has made its trek to Pluto’s smallest moon called Kerberos and snapped a few pictures before it moved on. What this new image reveals is giving scientists some new information on this far away moon.

No you don’t need glasses, this image of Kerberos is blurred, but researchers are still thrilled with the results of July 14th, 2015 flyby of this space rock. Taken seven hours before New Horizon’s closest approach to Pluto itself, this image was created using four pictures taken by the LORRI (Long Range Reconnaissance Imager) at a distance of 245,600 miles (396,100 kilometers) from Kerberos. The technology behind this pixilated wonder?

According to Astronomy Magazine online this image was “deconvolved to recover the highest possible spatial resolution and over-sampled by a factor of eight to reduce pixilation effects.” 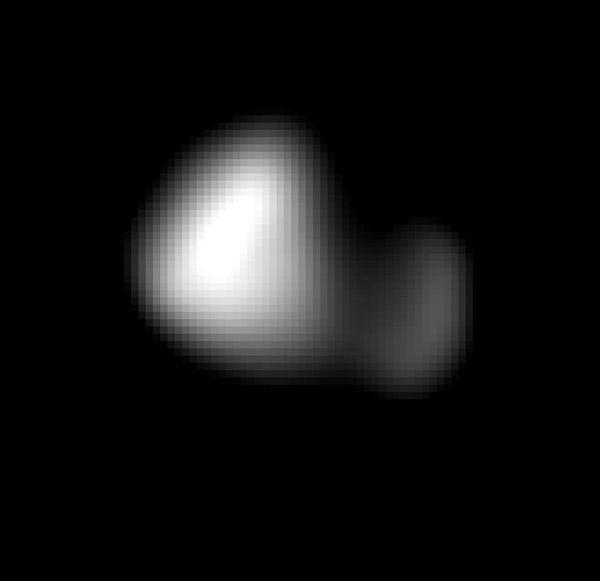 Revealing the Wonders of Kerberos ~ It’s smaller than expected!

According to a statement made by Hal Weaver from the Johns Hopkins University Applied Physics Laboratory in Laurel, Maryland;

Once again, the Pluto system has surprised us.”

This new data reveals Kerberos to have a double-lobe. The larger section is approximately 5 miles (8 kilometers) across, while the smaller lobe is only about 3 miles (5 kilometers) across. Researchers suspect this odd-shape may be the result of a merger between two smaller space objects. The new pictures also show a shiny surface on this tiny moon which is thought to be the product of being coated by relatively clean water ice.

However, what researchers didn’t expect from this new data was how small Kerberos actually is. Before New Horizons made its pass by Pluto, researchers had to rely on the Hubble Space Telescope Images to gain an understanding of how much Kerberos could weigh. By using its gravitational influence on its neighboring moons, they estimated it to be quite large and massive and appeared faint only because its surface was covered in dark matter – that was indeed false.

In a statement made by Mark Showalter from the SETI Institute in Mountain View, California, he weighs in on the topic and says;

“Our predictions were nearly spot-on for the other small moons, but not for Kerberos.”

Kerberos is the second-outermost moon of Pluto’s five sitting between Nix and Hydra. It orbits just over 37,000 miles (60,000 kilometers) from Pluto.

What other thrilling new finds will our spacecrafts reveal? Time will only tell, but until then we can continue to keep our eyes on the stars and our minds open to the realm of possibilities that lie ahead.