Russia, China, and the United States are in a race to build hypersonic weapons. Read on to learn more about these weapons.

Hypersonic weapons are defined as weapons that can travel faster than the speed of sound, or Mach 5.  Why do Russia, China, and the United States want to build hypersonic weapons? It seems that these nations want to avoid detection by central defense systems. Currently, inter-continental ballistic missiles can travel greater than Mach 5. However, they arc as they travel. Recently, China announced that they have successfully conducted a test on a hypersonic cruise missile that travels at Mach 6. 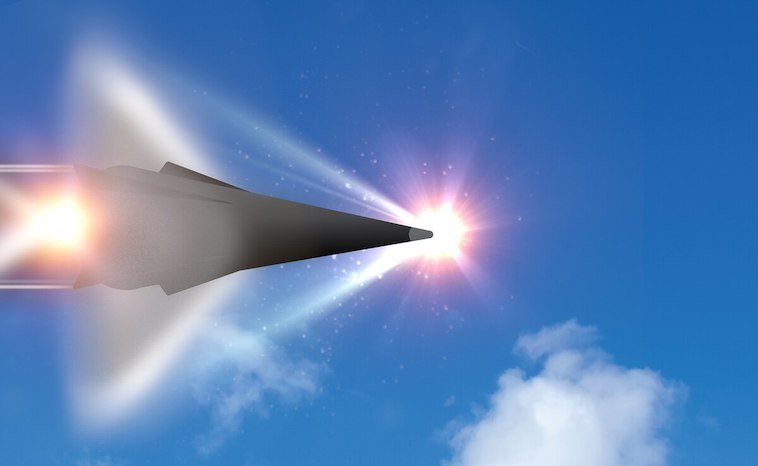 This test has prompted the United States to move forward in a decades-long avoidance of making hypersonic missiles. Why the avoidance? The cost, time, and technology, always seemed to be out of reach. “You see a flurry of activity, a lot of investment, and then we conclude it’s a bridge too far,” says aerospace engineer Mark Lewis, director of defense research and engineering for modernization in the U.S. Department of Defense. Technological hurdles such as propulsion, control, and heat resistance prevented development.

The United States has recently allocated 1 billion dollars into hypersonic research. The U.S. Navy plans to put one of its first hypersonic weapons to sea in eight years, aboard submarines. The name of the new missile is called Global Strike.

Heating factors into the development of the missile. However, to make the missile maneuver the way they want, engineers have created a triangular-shaped weapon. This shape helps offset some of the heating issues. As of now, the missile can withstand temperatures of 2,000 C or 3632 Fahrenheit. It’s not only heating they have to solve. They also have to solve how air coming into the engine area moves within the chamber.

High airspeeds also pose challenges for engines on HCMs, which, unlike HGVs, have their power plants. HCMs use a supersonic combustion ramjet, or “scramjet,” to accelerate. “It’s the simplest type of jet engine you could ever imagine, where an open tube allows air to mix with fuel,” Lewis says. “It’s also perhaps the most complicated type you can imagine because of the extreme conditions under which it operates.”

Boost glide hypersonic weapons take off like ballistic missiles but remain in the atmosphere, leveling off and then gliding to their targets at speeds over Mach 5. The unique flight profile of boost-glide weapons makes them unstoppable by modern air defenses. This missile could strike anywhere in the world in under an hour. This indicates that the missile could travel between the Mach 10 to Mach 20 range or 7,600 to 15,200 miles an hour. Global Strike would also be useful in a major conflict with an adversary, targeting enemy headquarters, radar sites, and missile batteries, weakening the enemy’s defenses and paving the way for strikes by manned aircraft.

Russia recently unveiled a weapon called the Kinzhal, said to reach Mach 10 under its power, and another that is boosted by a rocket to an astonishing Mach 27. China showed off a rocket-boosted hypersonic glide vehicle (HGV) of its own, the Dongfeng-17, in a recent military parade.

Right now, the United States is unable to detect a launch of hypersonic missiles. However, plans are underway to place satellites in low Earth orbit by 2030. Once the satellites can detect the heat from the missiles, the military can then develop a way to stop them from hitting potential targets.