The Hubble Space Telescope got its most intense workout when scientists pushed it to its very limits and spotted a “new” galaxy that is thought to have existed only 400 million years after the beginning of the universe when it was only 3 percent of its current age.

Named GN-z11, this faint galaxy took a team of astronomers to measure its distance from Earth. However, what the team discovered had provided additional strong evidence that other unusually bright galaxies (found in earlier Hubble images) are really at extraordinary distances. Remarkably they now know that we are closing in on the first galaxies that formed in the universe.

How did they get the measurements?

At first, GN-z11’s distance was calculated by analyzing its color in images taken with both Hubble and the NASA Spitzer Space Telescope.  But now for the first time the team has used Hubble’s Wide Field Camera 3 (WFC3) to precisely measure the distance to GN-z11 spectroscopically by splitting the light into its component colors. Gabriel Brammer of the Space Telescope Science Institute gave this statement;

“Our spectroscopic observations reveal the galaxy to be even further away than we had originally thought, right at the distance limit of what Hubble can observe.” 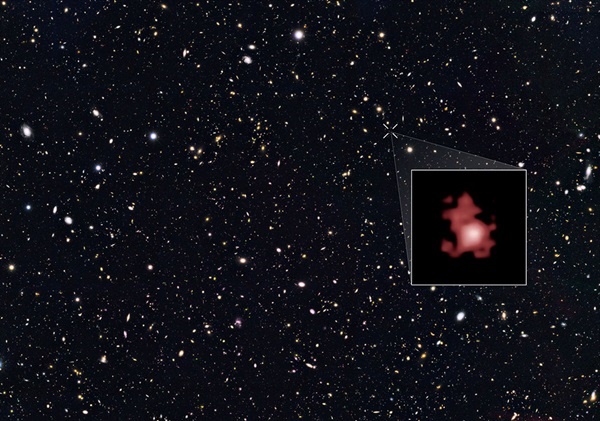 This new find is exciting as scientists once thought getting details like this from such a far-off galaxy would have taken the help of the upcoming NASA/ESA/CSA James Webb Space Telescope (JWST).

“We’ve taken a major step back in time, beyond what we’d ever expected to be able to do with Hubble. We managed to look back in time to measure the distance to a galaxy when the universe was only three percent of its current age,” said Pascal Oesch of Yale University in New Haven, Connecticut.

To determine large distances, like the one to GN-z11, astronomers measure the red-shift of the observed object which is a result of the expansion of the universe. This phenomenon occurs because every distant object in the universe appears to be getting further away from us, and therefore as a result, its light is stretched into the longer, redder wavelengths.

“The previous record-holder (EGSY8p7, had a redshift of 8.68.) was seen in the middle of the epoch when starlight from primordial galaxies was beginning to heat and lift a fog of cold hydrogen gas,” said Rychard Bouwens from the University of Leiden in the Netherlands. “This transitional period is known as the reionization era. GN-z11 is observed 150 million years earlier, near the very beginning of this transition in the evolution of the universe.”

The observations taken by both the Hubble and Spitzer telescopes reveal that the infant galaxy is 25 times smaller than the Milky Way and has just one percent of our galaxy’s mass in stars. But strangely enough, the number of stars in the newborn GN-z11 is growing fast, which puts this galaxy’s rate of star formation at about 20 times greater than the Milky Way does today. This high star formation is why the Hubble was able to pick it up and do detailed observations on it.

This video shows just how far away GN-z11 is from us here on Earth.

GN-z11 is perhaps just the first of many new galaxies waiting to be discovered. Stay tuned while we search for more fascinating and mind-boggling space wonders.