Astronomers have discovered a star that they believe was ejected from a black hole five million years ago. Read on to learn more about the star and where they think it is headed.

A team of international astronomers has discovered a star ejected from a black hole, as proposed by Jack Hill in 1988. The black hole, located in the constellation Grus or Crane, ejected the star about 5 million years ago. The star, S5-HVS1, was discovered by Sergey Koposov, the lead astronomer at Carnegie Mellon.

S5-HVS1 moves about 3.7 million miles (6 million km) per hour. It’s mass measures over twice the mass of the Sun and subsequently hotter. It looks to be at most 500 million years old, making it rather young. However, it’s roughly 29,000 light-years from the Sun. Astronomers believe that at that rate of speed, it will leave the Milky Way galaxy and never return.

“The velocity of the discovered star is so high that it will inevitably leave the galaxy and never return,” said Douglas Boubert, a researcher at the University of Oxford. Once it leaves the galaxy, it will expand into a red giant. Furthermore, astronomers believe at some point it will turn into a white dwarf.

Observers from the Southern Stellar Stream Spectroscopic Survey used two methods to discover the star. The survey team used the Anglo-Australian Telescope and the ESA’s Gaia satellite. The survey involved a collaboration of astronomers from Chile, the U.S., the U.K., and Australia.

S5-HVS1 shows a primary example of the Hills mechanism in motion. The Hills mechanism is a phenomenon that occurs when a supermassive black hole disrupts a binary star system. Tidal forces from the black hole cause one of the stars to be captured by it. As a result, it falls into an orbit around it. The other star is ejected away from the black hole at very high speeds. Astronomer Jack Hills proposed the phenomenon in 1988. In November of this year, his theory became a reality. 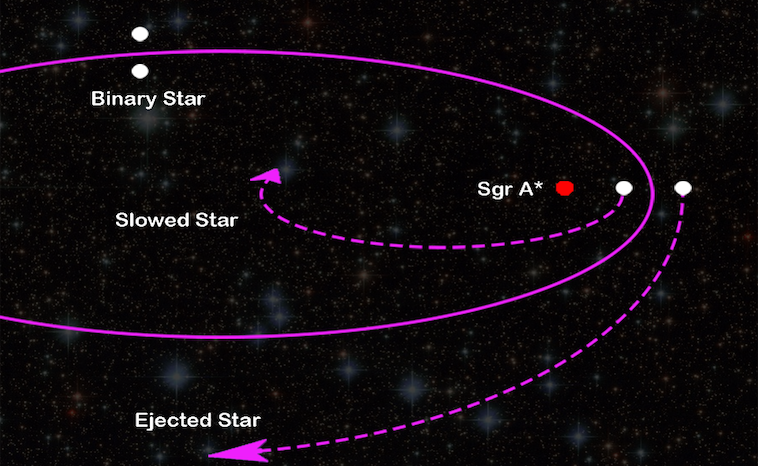 “Seeing this star is really amazing as we know it must have formed in the galactic center. That is a place very different from our local environment. S5-HVS1 seems a visitor from a strange land,” said Ting Li from Carnegie Observatories.

Astronomers gave much credit to the Anglo-Australian Telescope. “The observations would not be possible without the unique capabilities of the 2dF instrument on the AAT,” said Daniel Zucker, an astronomer at Macquarie University in Sydney, Australia. “It’s been conducting cutting-edge research for over two decades and still is the best facility in the world for our project.”

When used with their own data, Gaia gave them the direction it was traveling in three dimensions. As a result, they were able to determine the actual speed of the star.

Will astronomers discover more of these ejected stars? Chances seem good that more of these stars exist. It remains impressive that Jack Hills’ theory came into reality this year. This marks a truly fantastic event in astronomy.