An area of sand between Egypt and Libya has pieces of yellow glass. Where did the glass come from? Read on to learn more about the Libyan desert glass mystery.

In 1945, US scientists tested a prototype of the atomic bomb in the New Mexico desert. The explosion turned the sand in the immediate area of the impact into glass. Glasses can also form in nature.  Sand and/or rocks, often high in silica,  heated to high temperatures and then cooled rapidly form glass.

Yellow glass exists in the desert sands between Libya and Egypt. Scientists and geologists have spent decades analyzing the glass. They want to know how the glass formed. Meteorite impact always led the front of the theories. However, airbursts may also have caused the glass to form. A recent article in Geology from Curtain University in Australia reveals the source the glass. “Both meteorite impacts and airbursts can cause melting,” said lead author Aaron Cavosie, a geologist at Curtin University in Australia. “However, only meteorite impacts create shock waves that form high-pressure minerals, so finding evidence of former reidite confirms it was created as the result of a meteorite impact.” How did the research team from Curtin University reach this conclusion? 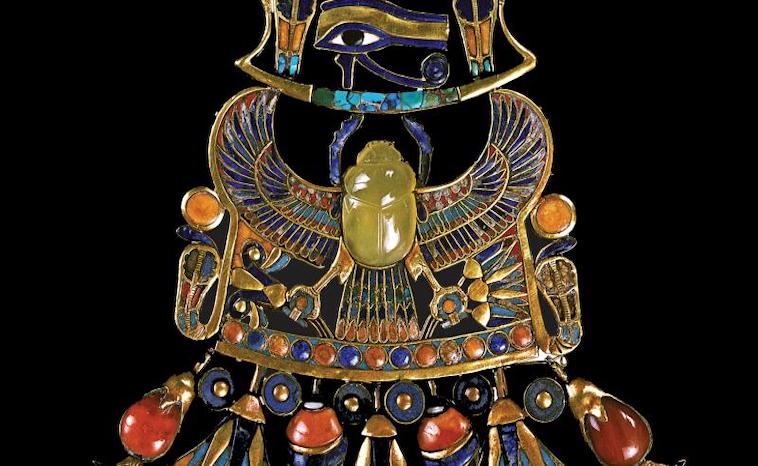 Yellow Glass scarab beetle on a piece of jewelry from King Tut.

When a meteor strikes a planet’s surface, the energy release from the impact can melt rock and soil into a liquid. Consequently, the liquid cools and hardens quickly into a solid. As a result, impact glass forms before the atoms have time to arrange into a crystal lattice. The team from Curtain University tested seven pieces of pale yellow glass from the desert. Using a scanning microscope geologists looked at Zircon crystals in the glass.

The presence of Zircon told researchers that a meteorite hit the desert. Zirconium has been found in S-type stars, the sun, meteorites and in lunar rocks, according to the Los Alamos National Laboratory. Lunar rocks appear to have a surprisingly high zircon content compared to terrestrial rocks, according to analysis of lunar rock samples from the various Apollo missions. Geologists concluded that the Zircon was once reidite. The mineral reidite forms under very specific high-pressure circumstances. For example, when a reidite forms when a meteorite slams into Earth. However, it does not form when such a space rock explodes in the air.

Governments all over the world have discussed the threat of meteors hitting the Earth. In those discussion comes worry over space rocks exploding over the Earth as well. Airbursts are meteors exploding as they hit the thicker part of Earth’s atmosphere. After the 2013 Chelyabinsk, Russia airburst event, governments have been worried. They worry that airbursts have the potential to heat the Earth to high temperatures. The rock that exploded over Russia blew out glass and hurt 1,200 people. However, it did not send a glass forming heat wave to the ground. Geologists believe that the Libyan desert glass can reduce the worry associated with airbursts. Furthermore, geologists haven’t tracked down any evidence of relatively recent reidite-free glass samples. The geologists from Curtain University believe that airbursts do not turn desert sand into glass.

This conclusion is good news for governments looking to protect their citizens. The mystery of the glass in the Egyptian desert has been solved!