Do fungi live on Mars? If so, how did they get there? Read on to learn more about fungi on Mars.

A new paper in the Journal of Astrobiology and Space Science suggests that life on Mars may exist in the form of fungi. In the paper titled Evidence of Life on Mars? Researchers take the position that various types of fungi and lichens have been photographed on Mars by space rovers. What evidence do they have for this position?

What led scientists to make this assertion that fungi exist on Mars? One scientist stated the following from the paper.

Dr. Regina Dass, contends that “there are no geological or other abiogenic forces on Earth which can produce sedimentary structures, by the hundreds, which have mushroom shapes, stems, stalks, and shed what looks like spores on the surrounding surface.” She goes on to note that “fifteen specimens were photographed by NASA growing out of the ground in just three days!”  Skeptics argue that what the photographs show are just rocks on the  Martian surface. However, other scientists point out that they have pictures of fungi on the rover itself.

Dr. Nicolo Cantasano acknowledged that photos purportedly showing “masses of black fungi growing on the rovers” as additional evidence for the fantastic theory. He states that the wind has nothing to do with fungi on the rovers.  How did the fungi and lichens get to Mars? 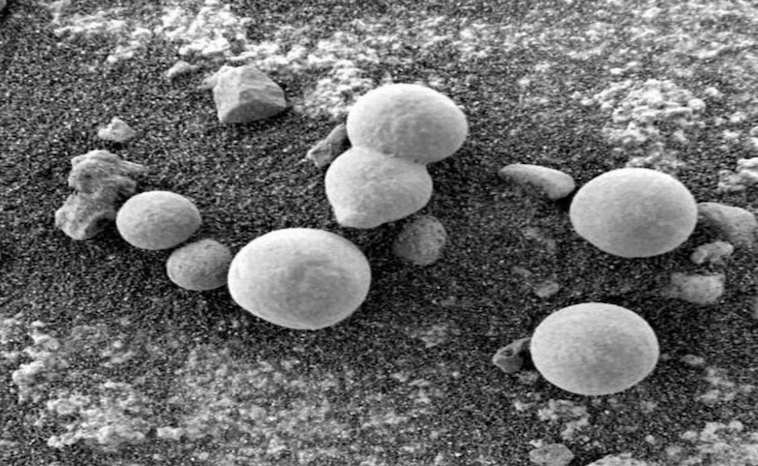 Did solar winds send spores to Mars? Researchers believe that may be a possibility. They say that 1,800 different types of bacteria, fungi, and algae float in the Troposphere high above the Earth. Normal solar winds would not have enough force to transfer these particles to Mars. However, a large solar event may have sent the particles through space and onto the Martian surface. Wouldn’t the impact of radiation and pressure kill the fungi? Researchers suggest that tiny spores could survive  solar winds.

“Thus, it could be predicted that some airborne microbes, fungi, lichens, and algae, as well as water and dust, have been repeatedly lofted into the upper atmosphere; that a significant number remained viable, and were then swept into space and propelled by solar winds throughout the solar system some of which may have landed on Mars only to go forth and multiply.” (Journal of Astrobiology, 2019)

Did meteorites and asteroids send fungi and bacteria to Mars? Again, they assert that it is indeed possible for that to happen.

According to researchers they have evidence that space fungi and bacteria can survive extreme forces placed upon them. “Many species of microbe have evolved the ability to survive a violent hypervelocity impact and extreme acceleration and ejection into space.

Further, they have survived the frigid temperatures and vacuum of an interstellar environment. In addition, they would survive the UV rays, cosmic rays, gamma rays, and ionizing radiation they would encounter. Finally, they would survive the descent through the atmosphere and the crash landing onto the surface of the planet.” (Journal of Astrobiology, 2019)

Skeptics of the paper claim that the photos are too grainy to determine whether or not the objects are fungi. Others says that the theories posed by the researchers are unable to have supporting documentation. Researchers in the paper did suggest that NASA should send a probe to recover the objects for further study. We await the results of news to either confirm or deny the existence of fungi on Mars.