Canada is home to one of the most documented UFO events ever recorded. Read on to learn more about an incredible UFO encounter.

Stefan Michalak was searching for minerals along Falcon Lake, 80 miles east of Winnipeg, Manitoba, on May 20, 1967. Stefan Michalak was an industrial mechanic by trade and an amateur geologist who liked to venture into the wilderness around Falcon Lake — about 150 kilometers east of Winnipeg — to prospect for quartz and silver. Prior to moving to Canada, Stefan was a military policeman in Poland.

On May 20, 1967, Stefan was near a vein of quartz from a Precambrian Shield. Suddenly, a gaggle of geese startled the 51-year-old. Their eruption of honks alerted him that something was amiss. Within seconds, he spots two glowing objects hovering ahead of him. One takes off, and the other lands just 150 feet away. According to Michalak, the silver craft is 35 feet in diameter and brilliantly lit.

Believing it to be a secret U.S.military experimental craft, Stefan sat back and sketched it over the next half hour. Finally, he decided to approach the UFO. Later, Michalak recalled the warm air and smell of sulfur as he got close. Furthermore, he heard a whirring sound of motors and a hissing of air.

Still believing it was a military craft, he called out. As a mechanical engineer, he figured they could use his help. After calling out to the “Yankee boys,” thinking they were Americans, things went quiet.  The voices he had heard as he got close went quiet. No one answered.  Stefan tried in his native Polish, then in Russian, and finally in German to get the voices to respond. 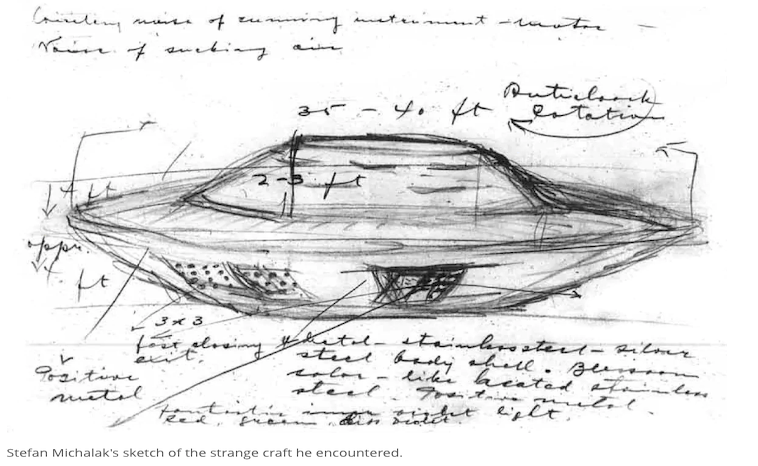 Looking Inside A UFO

Stefan noticed the doors of the aircraft were open and decided to look. Inside, Stefan said he saw light beams and panels of various-colored flashing lights. However, he could not see anyone or any living thing. When he stepped away, three panels slid across the door opening and sealed it.

He reached to touch the craft, which he said melted the fingertips of the glove he was wearing. Stefan also noticed a panel that contained a grid of holes. Shortly afterward, he was struck in the chest by a blast of air or gas that pushed him backward and set his shirt and cap ablaze.

He ripped off his burning clothes as the craft lifted off and flew away.

Following the encounter, Michalak became very sick. Over the next few weeks, he suffered from severe headaches, nausea, weight loss, blackouts, and diarrhea. These are symptoms pointing to a radiation burn. But doctors could not find anything wrong. Nine months later, he collapsed and finds burn marks in a series of dots on his chest. Michalak’s doctor sends him to the Mayo Clinic for tests. Weeks later, when Michalak’s doctor tries to find out the results of the examination, the Mayo Clinic claims they have no such person on file.

Until the day he died in 1999 at the age of 83, Stefan believed he should never have said a thing. However, at the time, he felt it was a duty. He wanted others if they were to see the same thing, to avoid it and not get hurt, Michalak said.

Two books have been written on the alleged Falcon Lake occurrence:

In April 2018, the Royal Canadian Mint released a $20 silver coin depicting the alleged event as part of its Canada’s Unexplained Phenomena series,