Astronomers have discovered an exoplanet that is so hot that it rains iron droplets. Read on to learn more about this unusual event.

Located 640 years away in the constellation of Pieces sits WASP-76P. It is a giant exoplanet that reaches daily temperatures of 4352 degrees Fahrenheit (2400 Celsius). The exoplanet rains iron droplets at night time when temperatures cool. Finding a planet that rains iron has surprised scientists. They have seen other extreme planets that rain diamonds and rocks. Each new discovery pushes them to look further into as many planet atmospheres as possible. 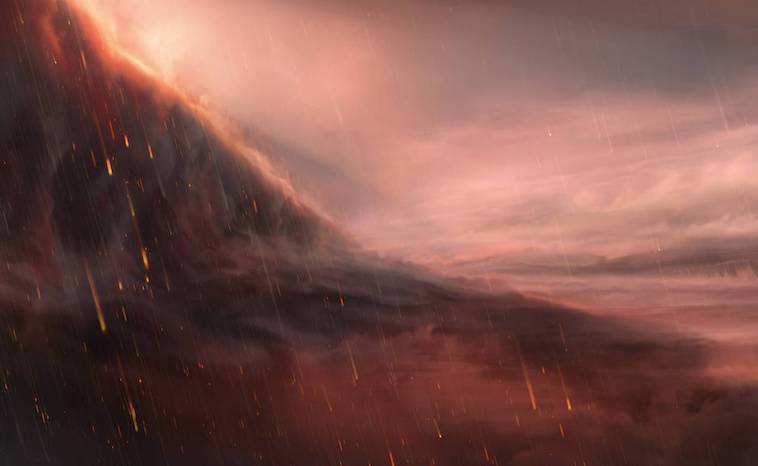 To observe WASP 76P atmosphere, astronomer used the new ESPRESSO instrument on ESO’s VLT in the Chilean Atacama Desert. They identified for the first time chemical variations on the ultra-hot gas giant planet. The ESPRESSO instrument is an Echelle spectrograph. An Echelle spectrograph measures changes in the light spectrum with great sensitivity. Astronomers found that the day and night time temperatures vary.

The ‘iron rain’ planet only ever shows one face, its dayside, to its parent star. However, the cooler night side remains in perpetual darkness. Like the Moon on its orbit around the Earth, WASP-76b is ‘tidally locked.’ This means that it takes as long to rotate around its axis as it does to go around the star. Astronomers estimate that it is two times the size of Jupiter. However, it takes less than two days to orbit its star.

During the day, it receives thousands of times more radiation from its parent star than the Earth does from the Sun. It’s so hot that molecules separate into atoms, and metals like iron evaporate into the atmosphere. However, it becomes far less abundant throughout the night. Scientists suggest that neutral iron in the atmosphere of WASP-76b condenses during the night to form clouds of liquid droplets. At night time, the temperatures drop to 2732 degrees Fahrenheit (1500 Celsius). They believe this drop in temperature causes the molten iron atoms to merge and rain down on the exoplanet during the night.

“One could say that this planet gets rainy in the evening, except it rains iron,” says David Ehrenreich, a professor at the University of Geneva in Switzerland. However, the next day, the heat from the nearby star separates the atoms once again. Another unusual observation centered around a vapor border. His team detected a strong signature of iron vapor at the evening border that separates the planet’s dayside from its night side. “Surprisingly, however, we do not see the iron vapor in the morning,” says Ehrenreich. The reason, he says, is that “it is raining iron on the night side of this extreme exoplanet.”

WASP 76B experiences severe winds from the ups and downs of temperature changes. Scientists estimate that the wind blows at 18,000 km/h on the giant planet. These winds contribute to the vapor border that forms as the planet experiences day and night.

This leads to the next question. What strange type of rain will they discover next?