A restoration project at the Esna Temple in Egypt have uncovered constellations recorded by early Egyptians. Read on to learn more about this ancient temple.

The Temple of Khnum or more popularly known as the Esna Temple, began as a shrine to the Egyptian God Khnum during the reign of Tuthmose III. His reign, during the 18th dynasty of Egyptian kings, lasted from 1479-26 BCE. A restoration project on the temple began in 2018, led by German and Egyptian researchers. Their efforts revealed colorful and detailed inscriptions and paintings under layers of soot and dirt. The team discovered evidence of previously “unknown” constellations in the Esna Temple through this cleanup process. 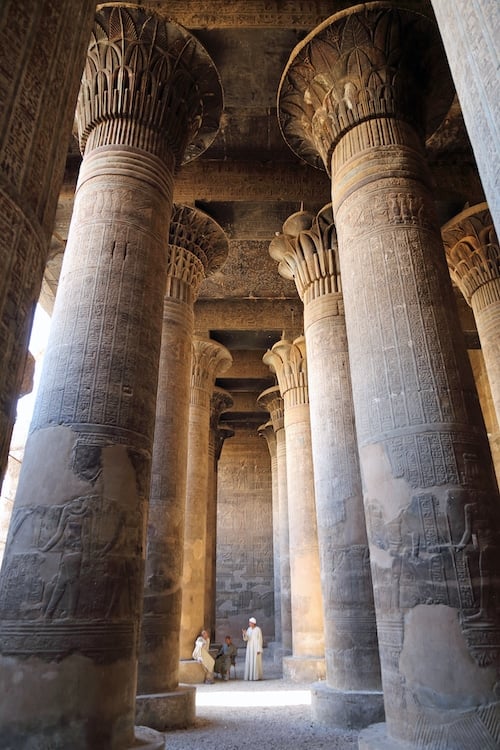 The early shrine went through several building periods as it changed from shrine to temple.  According to Ancient Egypt Online, the oldest complete part of the temple is the hypostyle hall’s back wall. This section was built during the Ptolemaic period and featured Ptolemy VI Philometer and Ptolemy VIII Euergetes. It is what visitors see today when they visit the temple. The rest of the excavated building was built by a series of Roman Emperors from Claudius (41-54 AD) Decius to Decius (249-251 AD).

The hypostyle hall or vestibule, leading into the original temple, stands alone as the only structure visible. The rest of the temple lies buried nine meters underneath the modern town. 24 columns support the large sandstone structure. Furthermore, it also has 18 free-standing columns decorated with painted carvings of plants. It stands about 120 feet long, 65 feet wide, and 50 feet high (37 by 20 by 15 meters). According to researchers, the vestibule would have been dwarfed by the actual temple. 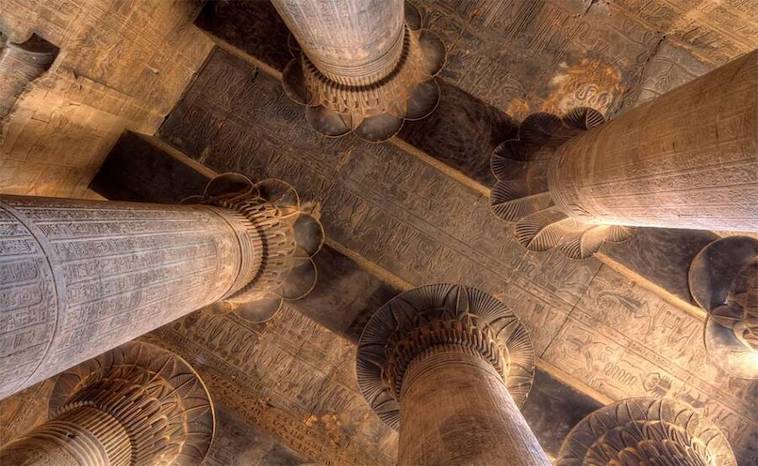 Esna’s temple is primarily dedicated to Khnum (a god of the Nile who molded the “ka” on his potter’s wheel). However, early Egyptians also dedicated it to several other deities.

Workers removed soot and dirt from the temple. They used special mixtures of alcohol and distilled water. Their process revealed the original painted carvings and hieroglyphics beneath still vibrant with color. “It looks like it was painted yesterday,” said project leader Christian Leitz, an Egyptology professor at the University of Tübingen in Germany. She went on to clarify, “But we are not repainting anything. We are just removing the soot.”

The decorated walls show some unique ritual scenes, such as the pharaoh’s dance before the gods. Further, they depict Egyptian life scenes, such as catching fishes and birds with a clap net. The temple’s columns, decorated mainly with inscriptions, display the only temple ritual known from ancient Egypt preserved in its entirety.

The decorations also include several calendars. The ceiling reveals Egyptian astronomical figures on the northern side and Roman zodiacal signs on the southern side.

Which constellations did they discover? They found depictions including the Big Dipper (known as Mesekhtiu) and Orion (known as Sah) during the restoration. They also found inscriptions about previously unknown constellations, including “Apedu n Ra,” or “the geese of Ra,” who is the ancient Egyptian sun deity. According to Leitz, “the astronomical discoveries at the Temple of Esna are a rarity among ancient Egyptian temples.” This discovery at the Esna Temple will open a new door for those that study ancient Egyptian astronomy.