NASA has announced that it is watching a magnetic anomaly happening over South America. Read on to find out what is happening and why.

NASA announced this week that it is watching an unusual event unfolding over the continent of South America and extending to Africa. It seems the Earth’s magnetic field over this area is splitting in two. NASA has given it the name the South Atlantic Anamoly (SAA).

Scientists have watched the magnetic field slowly change over the last several years. Earth’s magnetic field acts like a protective shield around the planet. It repels and traps charged particles from the Sun. However, this recent change has NASA looking into the transition with more focus. Why? The magnetic field appears to have a dent, which they believe will lead to a split. As a result, satellites or any other spacecraft orbiting the Earth will face particle radiation. This means that onboard computers and data collection of satellites may not operate.

NASA explains that the South Atlantic Anomaly comes from Earth’s core. The core affects the tilt of its magnetic axis and the flow of molten metals within its outer core. Eighteen hundred miles below Earth’s surface molten iron-rich metals churn. As a result, they produce energy called geodynamo, which provides the Earth’s electromagnetic fields. The motion of the core changes over time. Regions outside of the solid Earth also contribute to the observed magnetic field. These recent changes caused charged particles to become trapped in Earth’s magnetic field. Now they have started to dip closer to the surface. 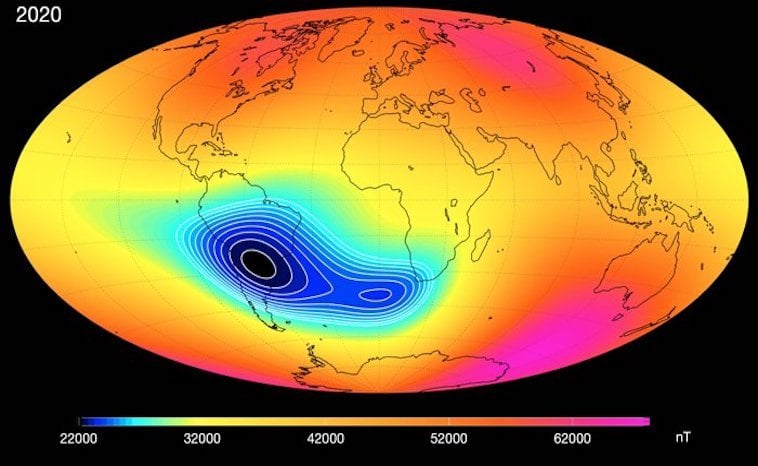 It is hard to imagine that happenings 1800 miles below the surface can affect happenings in low Earth orbit. However, the effects of the internal changes do indeed have an impact. To avoid losing instruments or an entire satellite, operators commonly shut down non-essential components as they pass through the SAA. Fortunately, the astronauts on the International Space Station have nothing to fear. Their spacecraft has protective plates to prevent radiation exposure.

NASA has confirmed that the magnetic field seems to be moving. Heliophysicist Ashley Greeley used two decades of data from SAMPEX to show that the SAA is slowly but steadily drifting in a northwesterly direction. NASA uses the Ionospheric Connection Explorer (ICON) to monitor the split. The ICON’s mission involves the study of solar wind and other space weather phenomena in Earth’s ionosphere. The ionosphere is a layer of Earth’s upper atmosphere that begins 62 miles (100 kilometers) up.

Scientists are also watching the shifting of the magnetic north and south poles. Does the pole shift have anything to do with the SAA? “We’ve known for quite some time that the magnetic field has been changing, but we didn’t know if this was unusual for this region on a longer timescale, or whether it was normal,” says physicist Vincent Hare from the University of Rochester in New York.

Even though the SAA is slow-moving, it is going through some change in morphology, so it’s also vital that we keep observing it by having continued missions,” Terry Sabaka, a geophysicist at NASA’s Goddard Space Flight Center in Maryland, said in the statement. “Because that’s what helps us make models and predictions.”

Will the magnetic field split completely? We will continue to watch this unfold and update it in future posts.