For almost 100 years now, a quasi-satellite has been quietly following Earth around the Sun. Scientists predict it will continue to do so for many centuries to come.

Designated 2016 HO3, this chunk of space rock is too far away to be classified as a “true satellite” but it is the best example we have of a quasi-satellite.

Asteroid 2016 HO3 was first spotted on April 27, 2016, by the Pan-STARRS 1 asteroid survey telescope on Haleakala, Hawaii, operated by the University of Hawaii’s Institute for Astronomy.  Although, researchers are not definite on its size just yet, they do know it ranges between 120 feet (40 meters) and 300 feet (100 meters).

As 2016 HO3 treks around the Sun, it does so in a sort-of leap frog pattern. Half of the time it’s closer to the Sun than Earth, while the other half of the year it is further away, causing it to fall behind us. The orbit of this asteroid is also tilted a little, which causes it to bob up and down each year through Earth’s orbital plane. 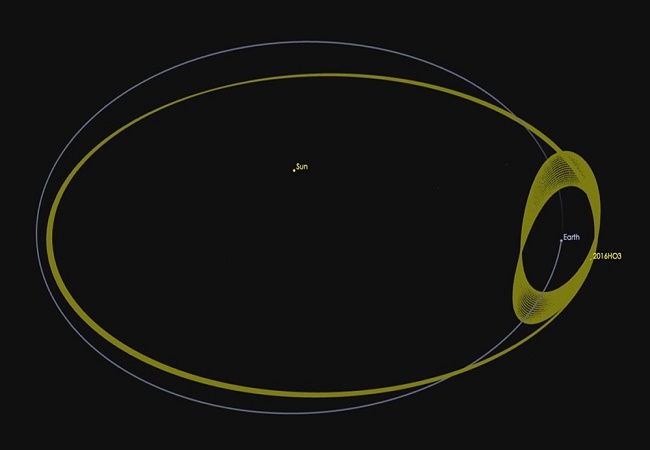 Asteroid 2016 HO3 has an orbit around the Sun that keeps it as a constant companion of Earth.
NASA/JPL-Caltech

This asteroid may seem a bit too close for comfort, but it doesn’t appear to be making any moves to disengage with Earth.

But even if it did by chance pull away from Earth’s grasp, the Center for NEO Studies keeps a website that has a complete list of recent and upcoming close approaches, as well as all other data on the orbits of known NEOs. Both scientists and members of the media and public can track information on known objects.

Want to learn more about asteroids? Tune into this informative video of these rocky wonders…it really is amazing!