A gamma-ray blast on June 25, 2016, was detected by two NASA satellites that monitor the sky for such events. A gamma ray blasts means that a massive star exploded, turned into a black hole, and blasted particle jets into space at the speed of light.  Two telescopes named the Fermi Gamma-ray Space Telescope and the Swift Gamma-Ray Burst Mission caught the event. The satellite observatories detected the burst of gamma rays, identified where in the sky it came from, and sent its celestial position within seconds to automated telescopes on the ground.

How Do They Explode?

First of all, most astronomers are sill in the dark about how the star erupts. “Gamma-ray bursts are catastrophic events, related to the explosion of massive stars 50 times the size of our sun. If you ranked all the explosions in the universe based on their power, gamma-ray bursts would be right behind the Big Bang,” said Eleonora Troja, an assistant research scientist in the UMD Department of Astronomy and lead author of the research paper. Astronomers detect gamma ray bursts once per day. The flash of Gamma radiation, brief, but intense, lasts from tens of milliseconds to about a minute. This short time span makes it difficult to observe in detail. Most of the time what they observe is the afterglow, or the fading explosion that contains radiation impacting the interstellar medium around the star that exploded. 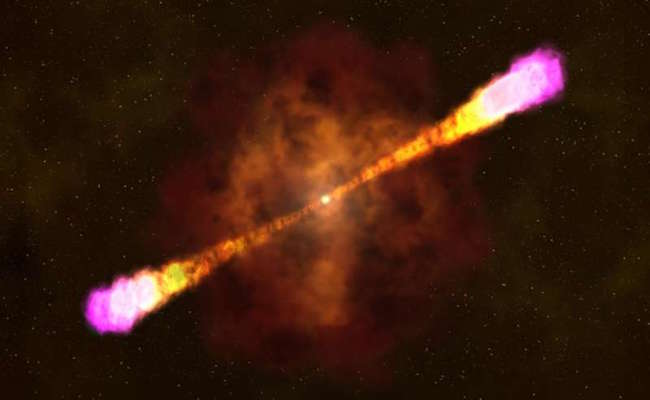 If a star is larger than about 5 times the mass of the sun, when the hydrogen fusing stops, a supernova will take place. Astronomers believe most of these explosions come from supernovas. These occur when a massive star reaches the end of its normal existence and blows up in a colossal explosion. A supernova throws off some of the star’s outer layers. As a result the core and remaining layers collapse in a few seconds into a neutron star or, in the case of highly massive stars, a black hole.

Only stars with very large masses can become black holes. Our Sun, for example, is not massive enough to become a black hole. Therefore in four billion years, when the Sun runs out of the available nuclear fuel in its core, our Sun will die a quiet death. Stars of this type will reach their end as white dwarf stars. More massive stars, such as those with masses of over 20 times our Sun’s mass, may explode as supernovae and eventually create a black hole.

Stars less than eight times heavier than the Sun die relatively peacefully. The outer layers shed themselves in a stellar wind. This makes the star temporarily visible as a planetary nebulae. The remnant, about the size of the Earth, will then be known as a white dwarf. Heavier stars die in man amazing supernova explosion. A moderately heavy star results in the remnant as a neutron star. A neutron star would be similar to a dense ball of neutral elementary particles, squeezed into a space little more than 10 miles across. Extremely heavy stars (more than 25 times heavier than the Sun) have no means to withstand their own gravity as they die.

Capturing the explosion of a supermassive star keeps astronomers glued to their telescopes. Hopefully, someday, they will learn what causes the explosion.