A human’s need to explore beyond our Earthly world has taken us to new heights, 1.272 billion kilometers in fact, to Saturn’s fifth largest moon, Dione.

For the past 11 years, NASA’s Cassini has been exploring the moons of Saturn with its latest exploits taking it past the icy moon named Dione. With its many cliffs and craters, Dione is making the world stand up and take notice of this once mysterious region.

The Discovery of Dione

The discovery of Saturn’s moon, Dione, was first spotted by the Italian astronomer, Giovanni Domenico Cassini in 1684 using a large aerial telescope he set up on the grounds of the Paris Observatory. However, this wondrous moon wasn’t officially given a name until John Herschel suggested the mythological Titans be used to represent the satellites of Saturn. The year was 1847 and since then, Dione has been a subject of interest. Did these astronomers ever imagine that hundreds of years later the object they spotted and named would be visited up close?

Dione is the 15th largest moon in our Solar System and measures in at 1,122 kilometers (697 miles) in diameter. Two thirds of Dione’s mass consists of water-ice with the rest being (what scientists theorize) is most likely a dense core of silicate rock.
The surface of this moon also contains a network of bright ice cliffs, chasms, ridges, long narrow depressions called, Fossae, craters and crater chains called Catenae. 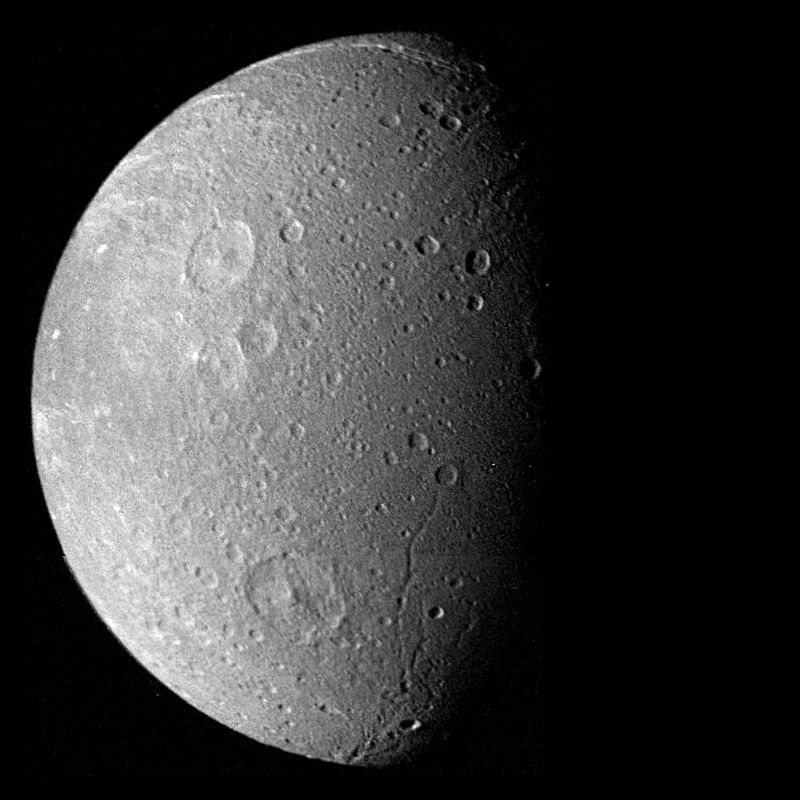 “Dione” by NASA/Voyager Licensed under Public Domain via Commons

When Voyager did a flyby of Dione in 1980, scientists were astounded at what it revealed; “wispy” features covering its surface. Scientists pondered what may be creating this reflected white surface that was thin enough not to obscure Dione’s surface below. One theory stated that perhaps shortly after Dione’s creation it became geologically active which could have resulted in its resurfacing. However, this hypothesis was proven wrong in 2004 when the Cassini probe did a flyby producing some close-up images of this mysterious moon.

Cassini Unravels Some of the Mystery

The first flyby of Cassini revealed the “wisps” photographed by Voyager were in fact bright ice cliffs that were most likely created by tectonic fractures. When Cassini returned to Dione in October of 2005 the closer orbit revealed images of several hundred meter high cliffs, as well as some moderately and heavily cratered areas.

Since then, Cassini has coasted by Dione another four times with its last visit being on August 17th of this year (2015). It swung by Saturn’s moon at a distance of 474 kilometers (295 miles) capturing the best photos to date.

“I am moved, as I know everyone else is, looking at these exquisite images of Dione’s surface and crescent and knowing that they are the last we will see of this far-off world for a very long time to come.”

Scientists plan on studying the images returned by Cassini in hopes of finding out more about the surface and the atmosphere of this amazing moon. 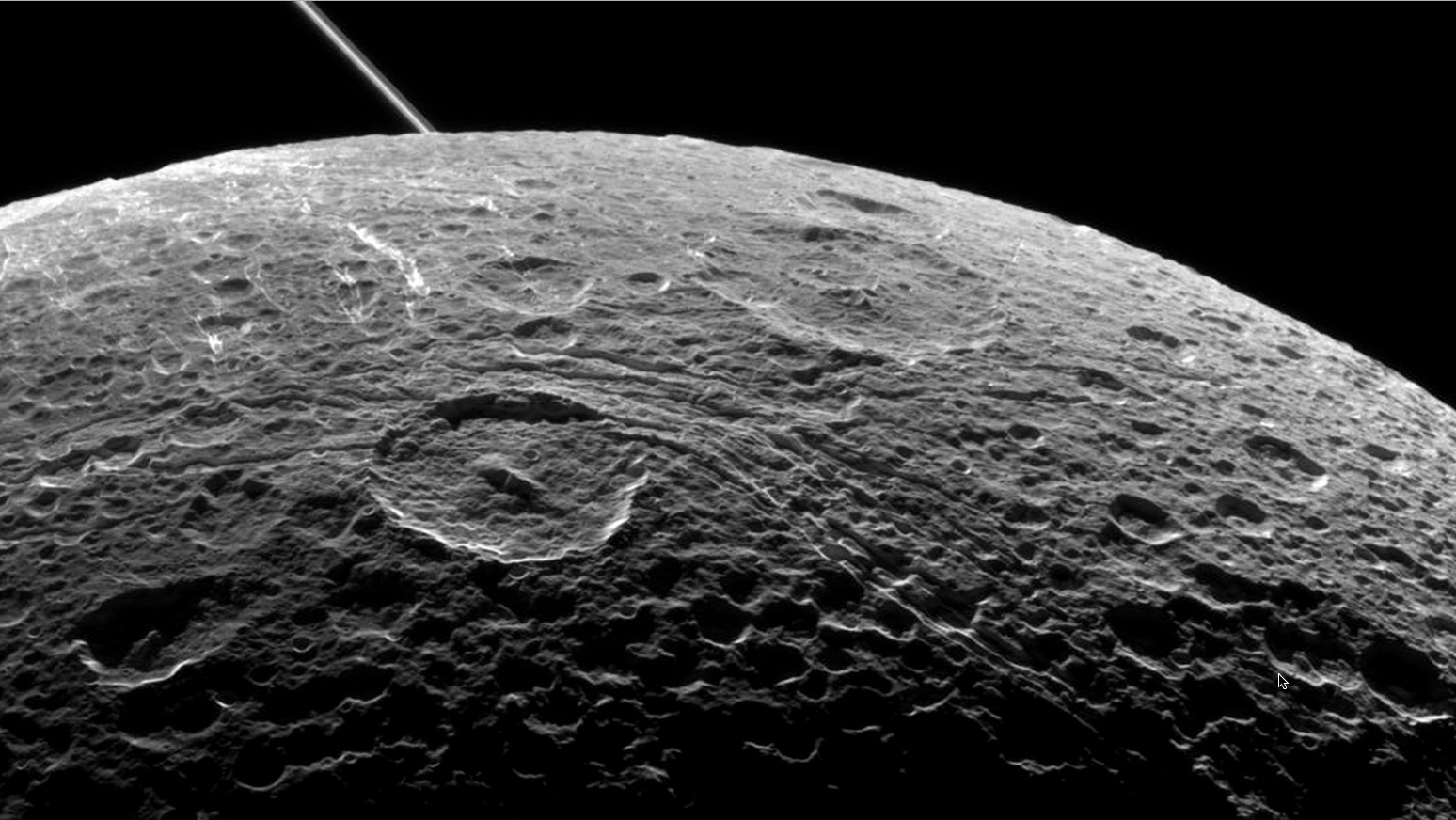 Although, this was Cassini’s last visit to Dione its mission to visit the other moons of Saturn is still in progress. It is on schedule to make three approaches to the moon of Enceladus (October 14th and 28th and December 19th) the closest range happening on its second flyby coming within a meer 49 kilometers (30 miles) from its surface- that should be visually stunning! From there Cassini will make its deepest-ever tour through this moon’s “plume of icy spray” collecting data about the mysteries of its surface. From there Cassini will then move on to visit Saturn’s small irregular moons (Daphnis, Telesto, Epimetheus and Aegaeon). We are eagerly anticipating some astounding views of these smaller moons.

However, perhaps the best part of Cassini’s mission is its “grand finale” which will be a repeated dive through the spaces between Saturn’s rings! What a show that promises to be, but unfortunately, we’ll have to wait a couple of years as this is scheduled to happen later in 2017.

What marvels our modern technology has enable us to discover and it all started with a dream to see past our stars. Let’s keep looking up with the wonder and delight that propels us to continue to explore beyond the realms of our imaginations.