Did Earth Begin As a Water Planet?

A new report suggests that ancient Earth may have been entirely covered in water. Read on to learn more about this discovery.

Scientists have always speculated about the appearance of ancient Earth. Did it have large continents like we see today? Was it void of water? If so, when did water appear? A recent study published March 2 in Nature Geoscience believes that ancient Earth was a water world.

Scientists have always assumed that the water level on the Earth remained fairly constant. However, they now believe that water levels covered the continents and rose as high as Mount Everest (29,032 feet). Rocks in Earth’s modern mantle, the thick layer of rock beneath the crust, may hold an ocean’s worth of water or more in their mineral structures. In ancient times, those rocks may not have absorbed the water brought to Earth by asteroids, as some researchers suggest.

To arrive at this conclusion, scientists looked at unique rock samples found in Western Australia’s Panorama district. Two minerals found deep in the mantle store much of its water today. Wadsleyite and ringwoodite are high-pressure variants of the volcanic mineral olivine. Rocks rich in those minerals make up 7% of the planet’s mass, although only 2% of their weight is water today. At higher temperatures, they cannot hold as much water. The research team suggests that it played an important part in water receding. As Earth’s mantle cooled, these minerals themselves became more abundant, adding to their ability to soak up water as Earth aged.

Further geological studies support this research. Some of the oldest known rocks on Earth, 3-billion-year-old formations in Australia and Greenland, are pillow basalts, bulbous rocks that only form as magma cools underwater. 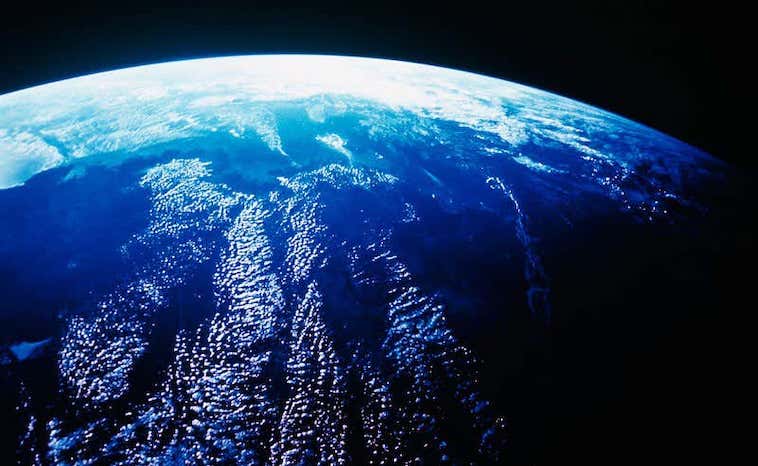 Although the larger ocean would have made it harder for the continents to appear, it could explain why they moved early in Earth’s history, says Rebecca Fischer. She is an experimental petrologist at Harvard and co-author on the AGU Advances study. Larger oceans could have helped move plate tectonics as water penetrated fractures and weakened the crust. This penetration created subduction zones where one slab of crust slipped below another. As a result,  a subducting slab began to dive, and the dryer, inherently stronger mantle would have helped bend the slab. This ensures its plunge would continue, says Jun Korenaga, a geophysicist at Yale University. “If you cannot bend plates, you cannot have plate tectonics.”

Where Did Life Begin?

Darwin’s theory suggests that life began in a warm, small pond. Creatures formed in the pond eventually crawled out onto land. However, this forms a potential problem for the theory. The ‘water world’ concept appears simultaneously as Darwin’s theory on life leaving the pond. If water covered the continents and Earth was a ‘water world,’ the origin and evolution of life on Earth may not have happened as theorized. Instead,  “its possible existence happened elsewhere,” wrote the authors.

A larger ocean also poses a problem for ideas that life started underwater. The ocean itself would have diluted any nascent biomolecules to insignificance. In addition, drowning most land, it also complicates the Darwin pond scenario. Thomas Carell, a biochemist at the Ludwig Maximilian University of Munich, says that he is now considering a different birthplace for life in light of the new paper. “Could life start in a sheltered, watery pocket within oceanic rocks that broke the surface in volcanic seamounts? Maybe we had little caves in which it all happened,” he says.