The night of April 15, 1912, spread fear and dread throughout the world in the days that followed. It was that night that 1,500 people sank on board the Titanic after it hit an iceberg earlier that evening. A new report suggests that a magnetic storm affected the Titanic’s navigation system causing it to steer off course in the cold waters of the North Atlantic. Furthermore, the ship’s crew was unable to communicate with nearby rescue ships. The night ended in tragedy. Only 700 people survived to tell about the horrifying event.

Eyewitness accounts from the night of April 15, state that Aurora Borealis was seen that evening. Aurora Borealis, also known as the Northern Lights, appear in the sky when charged particles from the Sun interact with gases in Earth’s atmosphere. When the material collides with the Earth’s magnetic field and trapped radiation belts, it can dump particles into our upper atmosphere to cause the Aurora. According to the researcher, Mila Zinkova, these charged particles affected compass readings on the Titanic and other nearby ships.

The Titanic and Its Compass

Compass readings were a large part of how ships navigated in the early 1900s. The same ‘charged’ particles can produce their magnetic fields. As a result, they can modify the Earth’s magnetic field and affect compass readings. A ship sailing by a compass with a 5-degree error can steer off course by nearly a kilometer. Ms. Zinkova believes that an error in the compass led the Titanic straight into an area filled with icebergs.

The magnetic storm may have caused the Titanic to venture off course. Wireless communication was still a relatively young technology at the time of the Titanic’s maiden voyage. The Marconi company, the Edwardian equivalent of a top technology brand, had put its wireless operators on board some of the more prestigious ships. The Titanic, as the showcase of an ambitious, optimistic era, had the biggest and best wireless equipment in the world. 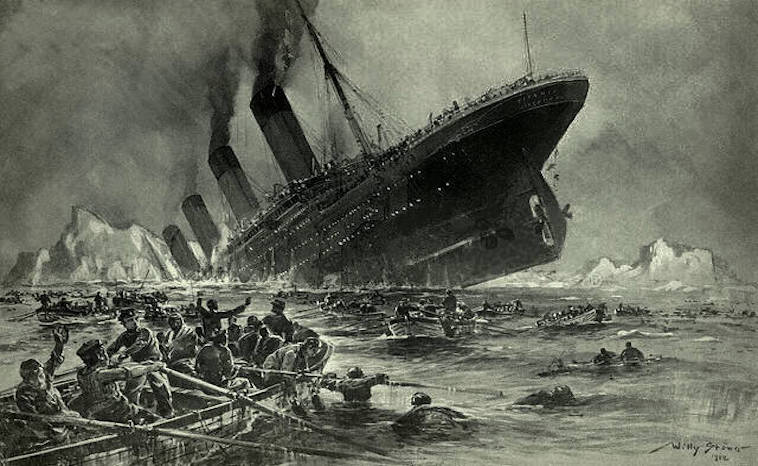 Earlier that evening, the Marconi operators reported that the wireless systems were not working correctly. A few Marconi operators working in the area of the disaster reported atmospherics and weak signals. The Baltic ship could not hear the transmissions by the Mount Temple ship. However, it had no difficulties communicating with Virginia, which was farther away,” says Zinkova.

According to research, the distress signal sent by the Titanic gave the wrong coordinates to the rescue ship Carpathia. That significant error worked in favor of the Carpathia. “The compasses of the Carpathia could have been under the influence of the geomagnetic storm for 5.5 hours, before and after she received the Titanic’s SOS, and until she reached the lifeboats. Therefore, a possible combined compass error could have been one of the factors that contributed to the successful rescue of the Titanic survivors”.

After decades of speculation as to the possible causes surrounding the sinking of the Titanic, the geomagnetic storm theory makes sense. Historically, geomagnetic storms have wreaked havoc on airplane navigation systems and telegraph communications. Sadly, for those that perished on that fateful night, the forces of nature were against them. May they Rest In Peace.