In 2019, the European Space Agency’s CHEOPS (CHaracterising ExOPlanet Satellite) space telescope began its mission observing stars with known planets. Read on to learn more about its observation of the giant planet WASP-189b.

Astronomers learned of the existence of WASP189b in 2018. During that time, they discovered that the giant planet closely orbited an A-Class star. Recently, the scientists released the first report from the CHEOPS mission. The report revealed some fascinating details regarding not only the planet but the star that it orbits.

What new details have the CHEOPS satellite found regarding WASP189b? First, they found that the planets have an equatorial diameter of about 220,000 kilometers. This makes it 1.6 times larger than Jupiter. According to the report, this figure makes it 15% higher than prior estimates. Second, they found that the planet travels with an orbital inclination. Orbital inclination measures the tilt of an object’s orbit around a celestial body. For example, Earth has an orbit of 0 degrees around our Sun. Pluto has the highest orbital inclination around our Sun at 17 degrees. As a result, the orbit is more oval-shaped or elliptical.

WASP189b’s orbital inclination measures nearly 90 degrees. This inclination demonstrates something that scientists have found in recent years regarding exoplanets. Their inclinations contradict the orbits of the planets within our solar system.

The giant gas planet has a shockingly tight orbit around its parent star HD133112. At 7.5 million kilometers, it is 20 times closer to it than Earth is to the Sun. As a result, the orbit is super-short, taking about 2.7 days to fly around HD133112. In addition, one side sees a permanent ‘day’ and the other side seeing a permanent ‘night.’ Scientists believe that the surface temperature ranges close to 3000° Celsius. By comparison, our Sun has a surface temperature close to 6000° Celsius.

The lead author of the paper Monika Lendl, states the following. “Because the exoplanet WASP-189b is so close to its star, its dayside is so bright that we can even measure the ‘missing’ light when the planet passes behind its star; this is called an occultation. It appears that the planet does not reflect a lot of starlights. Instead, most of the starlight gets absorbed by the planet, heating it and making it shine.” 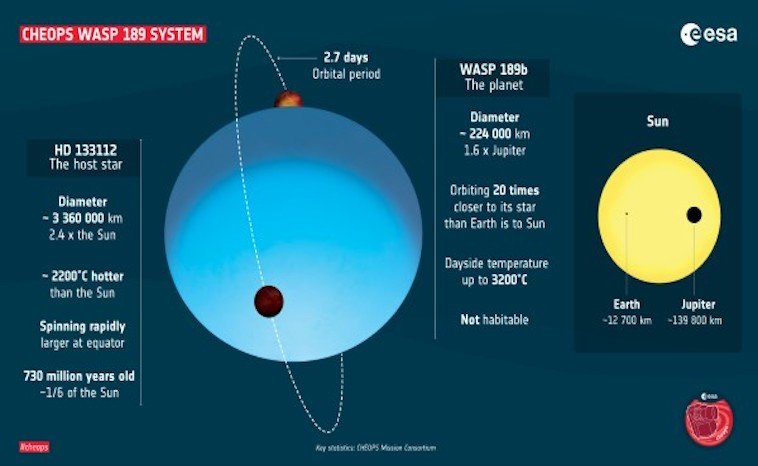 HD 133112 is the host star to WASP189b. It’s 2,000° Celsius (3,600° Fahrenheit) hotter than our Sun, and one of the hottest stars known to have a planetary system around it. CHEOPS made an interesting discovery about this celestial body too: it’s spinning so fast that it’s being pulled outwards at its equator.” Only a handful of planets are known to exist around stars this hot, and this system is by far the brightest,” says Lendl.

What thoughts can we reach about exoplanets in general based on the CHEOP’s observations? We can see that CHEOPs has the ability to get detailed information about exoplanets. In addition, exoplanets may not all follow an orbit along the plane of its host stars equator. In this early stage of reporting, the observation finds that exoplanets may orbit within their own set of rules. Whatever causes WASP189b to orbit around the poles of H133112 may apply to other systems as well. For now, we can look forward to the next report made by scientists in charge of CHEOPs.