NASA’s Cassini spacecraft has been orbiting Saturn now for over a decade and has been the one responsible for snapping some incredible images. But on September 24th 2015, Cassini was at the “right place at exactly the right time” as we are now enjoying the photo of Saturn’s two moons, Enceladus and Tethys, in almost perfect alignment. 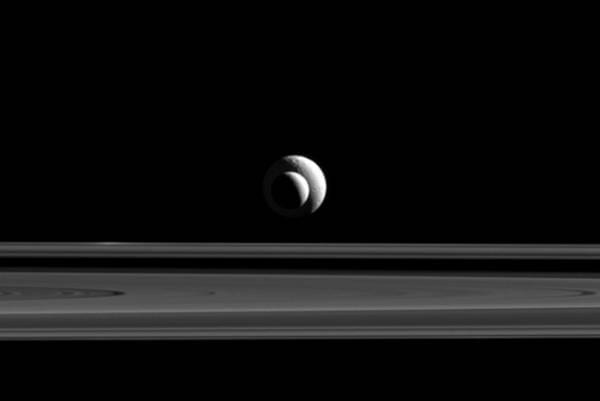 So why the interest in these moons?

Although, anything space-related is bound to capture the interest of astronomers and scientists, Enceladus is particularly spectacular as it is thought to possess the “ingredients for life.”

Unfortunately, Cassini will be leaving the Saturn realm and is getting ready for its last ever flyby of Enceladus on December 19th.  This is being called the E-22 (the 22nd flyby) in which Cassini will come within  3,106 miles (4,999 kilometers) of the moon’s surface.  Oh what images we can expect from that exploration!

Although Enceladus is Saturn’s tiny moon, this satellite contains a whole host of interesting and fun facts.  Let’s discover some of what this little moon has to offer.

Since Tethys is also involved in the alignment, let’s explore some fascinating and fun facts about this mid-size moon of the ringed planet.

The wonders Cassini has revealed about Saturn and her moon’s has been truly enlightening.  It’s too bad this spacecraft has to move on; however the wonders that lie ahead of its journey into the Universe is yet to be discovered.  But whatever is revealed is sure to fascinate and astound our Earthly minds.