Cancer Treatment from an Asteroid

Scientists have recently discovered that contents from an asteroid may help treat cancer. Read on to learn more about what they have found.

Through many years of testing and studying various places around the world, scientists conclude that the Earth suffered impacts from asteroids hitting its surface. They believe that one particular asteroid impact wiped out the dinosaurs. Located at these impact sites, they found a specific metal called Iridium. Strangely enough, scientists have found a use for the metal.

As the second densest element, Iridium belongs to the platinum group. As a matter of fact, this corrosion-resistant metal can be described as very hard, brittle, and silvery white.  Smithson Tennant discovered the metal among insoluble impurities in natural platinum in 1803. He named it Iridium for the Greek goddess Iris. She personified the rainbow which reminded him of the striking and diverse colors of its salts.

Meanwhile, scientists believe that the unusually high abundance of Iridium in the clay later from the Cretaceous-Paleogene boundary caused the extinction of the dinosaurs. Therefore, they think that more Iridium lies beneath the crust.

According to a recent study, scientists have successfully used Iridium to treat cancer. It can kill cancer cells without damaging the tissue around it. The researchers from China and England used the metal and organic materials to form a compound. This compound targeted cancerous cells in a lab-grown lung tumor.

When activated by a red laser, the compound turns the oxygen in the cells into singlet oxygen, which poisons and kills cancer. Using an ultra-high resolution mass spectrometry, the researchers witnessed the proteins affected by the photoactivation process. As a result, they proved which healthy cells remained unharmed.

“This project is a leap forward in understanding how these new iridium-based anti-cancer compounds are attacking cancer cells, introducing different mechanisms of action, to get around the resistance issue and tackle cancer from a different angle,” said study co-author Cookson Chiu. 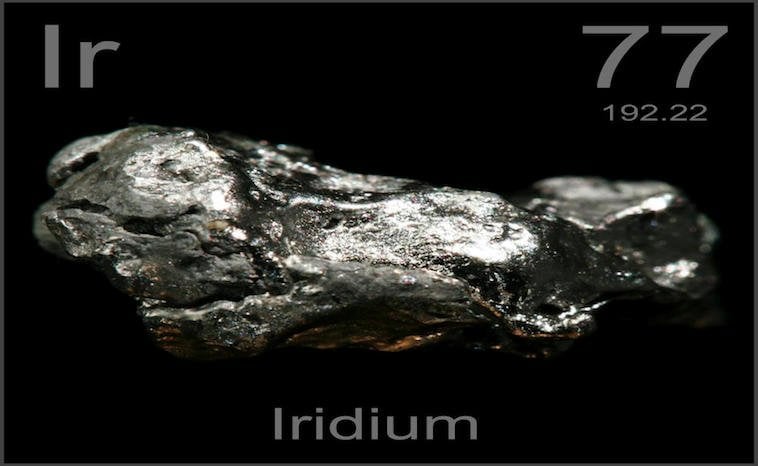 Professor Peter Sadler pointed out that platinum is already used in more than half of cancer chemotherapies, and added that “the potential of other precious metals such as iridium to provide new targeted drugs which attack cancer cells in completely new ways and combat resistance, and which can be used safely with the minimum of side-effects, is now being explored.”

“Research links between the UK and Chinese academics will not only lead to lasting collaborations but also have potential to open up the translation of new drugs into the clinic as a UK-China joint development.”

With this discovery people suffering from the long-term effects of cancer treatment may one day see a faster recovery period. Treatments causing tissue damage may also cease. This alone could lead to people surviving cancer and its devastating effects.