In a previous article, we discussed scientists desire to build a radio telescope and orbiter on the moon. How do they plan to construct this radio telescope? Read on to learn more about their plans.

For years scientists have used radio telescopes as part of their search for alien life. However, a group of scientists recently made a case for a lunar radio telescope observation area. They believe that the Earth is too “loud” and the atmosphere too thick for detecting aliens trying to communicate. As a result, they believe the moon will offer a quieter place to listen.

How do they see the construction of a radio telescope taking place on the lunar surface? One researcher suggested using a crater on the moon. His idea was to recreate Arecibo on the moon by suspending an antenna from a crater’s lip and using the basin as a reflector. The moon offers the benefit of zero gravity. Without gravity, a radio telescope far larger than any on Earth could greatly enhance SETI searches’ sensitivity.

Furthermore, building a radio dish in a lunar crater may be the most cost-effective. In recent years, private companies have found ways to reduce costs associated with space travel. For example, SpaceX reuses its rockets furthering cost controls. As more private companies and governments look to invest in space, by default, costs will decrease. SpaceX and Rocket Lab both are in a position to accommodate the delivery of supplies and satellites to the lunar surface. 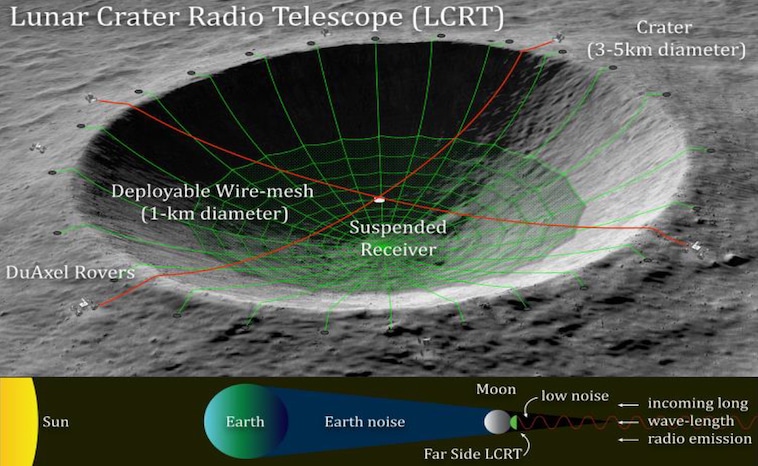 What about human involvement? A lunar SETI observatory would require a human settlement on the moon to build and operate the radio dish. However, robotic systems have improved in the last ten years. Researchers believe that robots may replace human interaction or significantly reduce involvement. For example, the Chinese robotic lander Chang’e 4 demonstrates the ability to have an autonomous object on the lunar surface. Each year the technology improves to see this becoming a real possibility.

Saptarshi Bandyopadhyay, a researcher at the Jet Propulsion Laboratory, has an idea on how robots can make a lunar radio telescope. His idea is to use rovers to deploy wire mesh in a crater on the lunar farside and suspend a receiver over the dish. His proposal, if accepted, would receive funding from NASA’s Innovative Advanced Concepts Program. 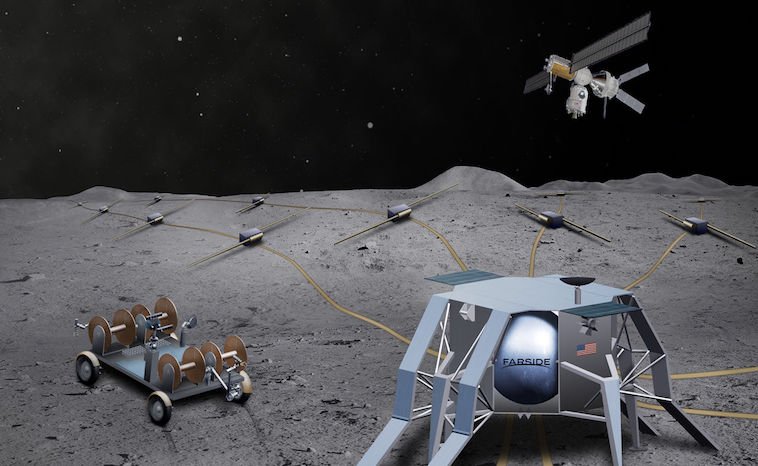 Jack Burns, a radio astronomer at the University of Colorado, has received a grant to study an idea of a radio telescope array called FARSIDE. Instead of using a crater as a dish, FARSIDE would deploy several smaller antennas across the lunar surface. They would collectively form a large radio telescope.

Researchers are aware that building an observatory comes with significant challenges—the two-week-long nights on the lunar surface impacts the ability to produce power. Solar panels would not provide the energy needed for an Arecibo-sized radio telescope. However, NASA has been developing small nuclear reactors that would deliver enough power to keep a moonbase running. In addition, these could also be used for a lunar radio telescope. As of now, NASA researchers have not tested one beyond Earth. As the push for a lunar observatory gets underway this decade, the prospect of a lunar radio telescope seems necessary. We look forward to seeing how new technology will help makes this possible in the coming years.