Black Holes are one of the strangest and most fascinating of all the celestial wonders. They have been a cause of mystery and delight ever since Albert Einstein’s general theory of relativity predicted their existence in 1916. Today, we have learned many things about these dense, light-less objects, so much so that the black hole had disappeared into outer space without a second thought…until now.

According to NASA a black hole is a place in space where the gravitational pull is so fierce that nothing (not even light) can escape from its powerful grasp. This is because the matter has been compressed into a “tiny” space and can occur when a star is dying.

There are three types of black holes; stellar, supermassive and intermediate. Each of these are unique in their own way.

Fact: Black Holes do not suck, but rather the objects fall into them.

Described as “small, but deadly” stellar black holes are thought to range in the hundreds of millions in our Milky Way. They are “relatively small” meaning they are generally city-size, but they are tremendously dense, holding approximately three to twenty times the mass of the Sun. This type of black hole is also extremely powerful so it will gather anything and everything into its gaping vortex including dust and gas from neighboring galaxies.

Recent studies have uncovered a new size in the black hole; the intermediate. These holes are right in between being small and supermassive and are thought to perhaps form when a cluster of stars collapse against each other. When this happens with several clusters in the center of a galaxy, a supermassive black hole could occur. 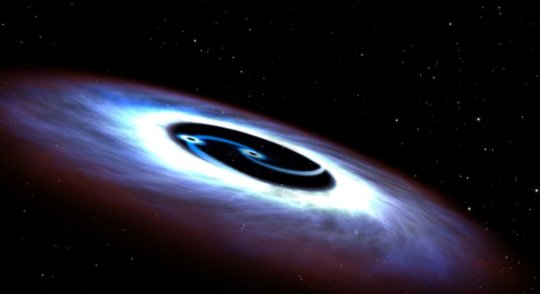 Fact: Theory once suggested if you were to fall into a black hole you would stretch out like a string of spaghetti, now it’s known that you would just burn up

We started this article with the promise of some new findings in the black hole and what we have dug up is sure to astound and excite even the most novice of space-watchers. Check it out…

Using observations of the Hubble Space Telescope, two people (University of Oklahoma astrophysicist and his Chinese collaborator) have found two supermassive black holes located in the Quasar closest to Earth; Markarian 231. The evidence of a smaller and larger black hole together give proof of the existence of binary black holes and suggest they may form their masses through a violent merger.

Fact: If a star gets too close to a black hole it can be torn apart.

Deep in the Virgo constellation scientists have spotted two supermassive black holes on a collision course that could send a burst of gravitational waves surging through the fabric of space-time itself! But don’t worry, this won’t happen for another 100,000 years.

The pair of supermassive black holes are spiraling together at 3.5 billion light-years from Earth, but only a mere light-week away from each other. These celestial wonders are also causing some rhythmic flashes of light coming from quasar PG 1302-102.

Scientists are anxious to study this anomaly as the study’s senior author, Zoltan Haiman, an astronomer at Columbia said in his statement;

“This is the closest we’ve come to observing two black holes on their way to a massive collision. Watching this process reach its culmination can tell us whether black holes and galaxies grow at the same rate, and ultimately test a fundamental property of space-time: its ability to carry vibrations called gravitational waves, produced in the last, most violent, stage of the merger.”

Fact: Scientists are still working to understand the equations by which black holes function.

Black holes are so much more than Hollywood paints them to be. There is some hard facts behind the fictional fun that scientists are still working to uncover. Until they reveal all the mysteries that lie in these black voids we will just have to keep looking and pondering the wonders the night sky has to offer.