The existence of black holes still leaves many questions for scientists. A recent report from the newly photographed black hole M87 shows rings around the hole. Read on to learn more about M87 and what scientists have learned.

Since the famous capture of a black hole in 2019, scientists have worked to learn more about it and the Messier 87 galaxy where it resides. Messier was a French astronomer. He published an astronomical catalog consisting of 110 nebulae and faint star clusters, which came to be known as the Messier objects. He discovered 87 in 1781 and cataloged it as a nebula.

The enormous elliptical galaxy is about 54 million light-years from Earth. It has about double the mass of our own Milky Way galaxy and contains about 10 times more stars. One studying this galaxy would note a peculiarity. For example, the Messier 87 galaxy has an unusual number of globular clusters of stars, around 12,000. The Milky Way galaxy only has about 200.

In the two years since then, more than 300 scientists have scrutinized data from that image as part of a global project called The Event Horizon Telescope. They found that a large portion of the dark-orange light surrounding the black hole’s mouth is filtered through a collection of magnetic energy. In fact, they denote, it can be mapped and measured in unprecedented detail.

As a result, they have reached a “major milestone,” says Iván Martí-Vidal, coordinator of the Event Horizon Telescope’s Polarimetry Working Group. “The new image helps astronomers better understand the physics behind the first image,” he says. Today’s image shows the role magnetic turbulence plays in a black hole’s ability to gobble up cosmic material and shoot matter into the universe. 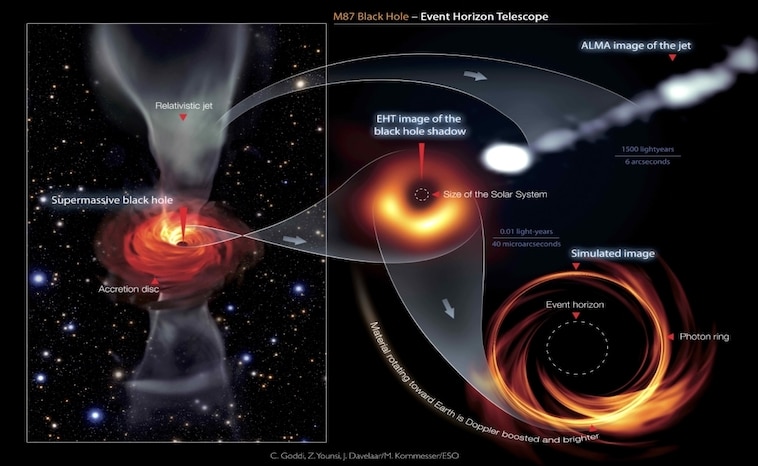 What causes the black hole to shoot matter into the universe?

In capturing this image, astronomers noticed a significant amount of polarized light around the black hole. Furthermore, through collaboration, researchers found what looks like polarized light.

As polarization is a signature of magnetic fields, this image clarifies that the black hole’s ring is magnetized.

Jason Dexter of the University of Colorado, Boulder went on to explain:

The observations suggest that the magnetic fields at the black hole’s edge are strong. How strong? Strong enough to push back on the hot gas and help it resist gravity’s pull. Only the gas that slips through the field can spiral inwards to the event horizon.

As a result, black hole M87 sends out enormous jets of matter at nearly the speed of light.  “These observations are a key to understanding how this occurs,” astronomers said in reports from Astrophysical Journal Letters on March 24, 2021. Astronomer Monika Moscibrodzka of Radboud University in the Netherlands said in a statement, “In the first images, we showed intensity only. Now, we add polarization information on the top of that original image.”

She goes on to say the following,

We are now seeing the next crucial piece of evidence to understand how magnetic fields behave around black holes. The activity in this very compact region of space can drive powerful jets that extend far beyond the galaxy.

Some of the jets measure unbelievable distances. For example, they measured jets extending 6,000 light-years across.

The team’s observations and this new view of the object in M87 are deepening scientists’ understanding of the structure of magnetic fields.