Researchers at the Naval Research Laboratory in Washington, D.C. have reported that a massive explosion has come from a black hole 390 million light-years from Earth.

Galaxy clusters are the most significant structures in the Universe held together by gravity, containing thousands of individual galaxies, dark matter, and hot gas. The Ophiuchus cluster lies 390 million miles from Earth. The black hole located inside Ophiuchus was not the first black hole researchers had encountered. However, the fact that an explosion came out of it got their attention.

Chandra observations reported in 2016 first revealed hints of the giant explosion in the Ophiuchus galaxy cluster. Norbert Werner and colleagues from the Naval Observatory said the discovery of an unusual, curved edge in the Chandra image of the cluster. At that time, his team discounted the idea that a black hole would make a dent that large. In part because they determined that a massive amount of energy would need to exist for the black hole to create the cavity.

Black holes are famous ingesting any gas or even stars that happen to get too close. However, they can also expel large amounts of material and energy in the form of radio jets. The amount of energy required to create the cavity in Ophiuchus is about five times greater than the previous record-holder, MS 0735+74. In addition, it is hundreds and thousands of times greater than typical clusters.

Prof Johnston-Hollitt, a co-author from International Centre for Radio Astronomy in Australia, added: “To give it another dimension; [the cavity] is about one-and-a-half-million light-years across. The hole that was punched in the surrounding space in the hot X-ray plasma would take light itself one-and-a-half-million years to traverse.”

How did researchers notice the explosion? 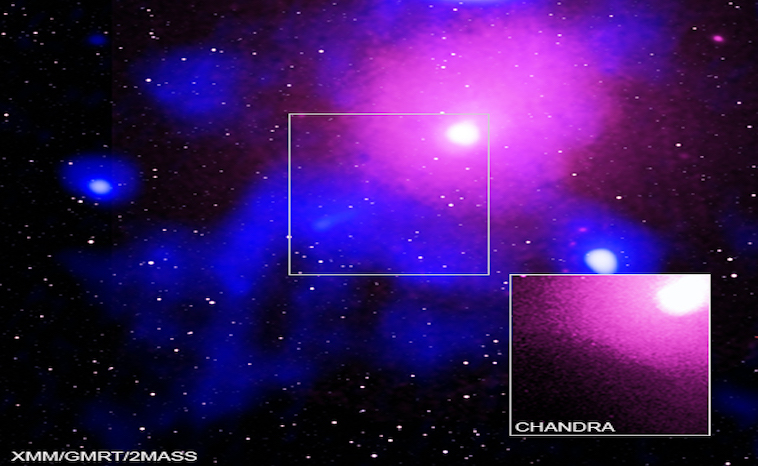 “This object was observed with the Chandra X-ray telescope by a previous team. They saw a bubble in the hot X-ray plasma in the center of this galaxy cluster. The scientists commented, ‘Well, this can’t be from one of these energetic outputs because it would be enormous; the scale would be unthinkable.’ So, they dismissed that possibility,” explained Prof Johnston-Hollitt, who directs the Murchison Widefield Array (MWA) in Australia. “We went back and observed with low-frequency radio telescopes. We discovered that this cavity filled with radio plasma.”

NASA states that the explosion has finished. “The black hole eruption must have finished because the researchers do not see any evidence for current jets in the radio data. Furthermore, this shutdown can be explained by the Chandra data. This data shows that the densest and coolest gas seen in X-rays is currently located at a different position from the central galaxy. If this gas shifted away from the galaxy, it would have deprived the black hole of fuel for its growth, turning off the jets.” (NASA, 2020)

The paper detailing the observation can be read in the February 27th edition of The Astrophysical Journal.