Birds Navigate by the Stars

How do birds migrate at night time? During the day they can use landmarks and the sun to travel. Studies suggest that birds use the stars to navigate. Read on to learn more.

Researchers have long suspected that birds have several unique qualities that help them migrate each year successfully. These qualities help them travel in some cases over 3,000 miles (5,000 kilometers). Birds acquire directional information from five primary sources.

Over the years, they have narrowed down the long-suspected belief that birds are sensitive to Earth’s magnetic field.

Migratory birds rely on Earth’s magnetic field to help them navigate the globe. After much research, scientists found that a protein called cryptochrome helped the birds. How? Cryptochrome is sensitive to blue light and enhanced its ability to respond to light. As a result, they can sense and respond to magnetic fields. What happens at night time when light levels are low?

“We were able to show that the protein cryptochrome is extremely efficient at collecting and responding to low levels of light,” said Southern Methodist University chemist Brian D. Zoltowski. “The result of this research is that we now understand how bird’s cryptochromes can respond to very low light intensities and function under nighttime conditions.”

In the 1960s, German ornithologists Franz and Eleanore Saver discovered that birds navigate the night sky by using the stars. An independent study by Cornell University used Indigo Buntings to test this discovery. Indigo Buntings a common songbird throughout the eastern United States and Canada. They migrate at night time during their annual migratory flights.

A Cornell scientist identified the specific star patterns used by the indigo bunting. Behavioral ecologist Stephen Emlen did extensive research on migrant birds. He found that caged migrant birds, fluttering and hopped about toward the direction they needed to migrate. He took the birds to a planetarium. A planetarium has a domed ceiling that is used as a screen for projected images of stars, planets, and other celestial objects.

Using Indigo Buntings in a planetarium, Emlen found that the birds oriented in the proper migratory direction using the stellar cues projected onto the planetarium ceiling. When Emlen shifted the position of the planetarium’s stars, the birds shifted their orientation as well. The buntings were shown to learn a “sky map” as they watched the stars’ rotation while they grew up. The young birds learn to recognize the area of least apparent movement around the pole; if maturing buntings were exposed to a false sky rotating around the star Betelgeuse (in the constellation Orion), they acted as if Betelgeuse were the North Star. (Stanford 2021)

Furthermore, he discovered that buntings orient to the North Star (Polaris). Emlen determined that buntings can orient Polaris or other constellations within 35 degrees of Polaris, especially the constellation Orion. This experiment helped Emlen to conclude that birds use nighttime stars to guide themselves. 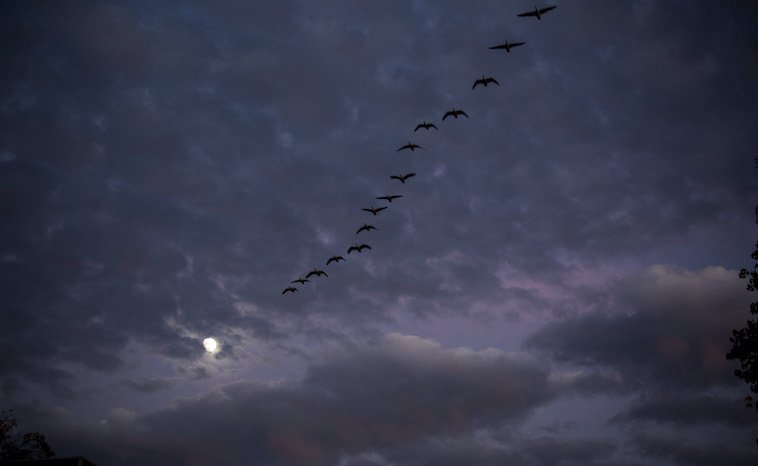 The fact that birds have a unique ability to use stars and have a special protein to aid in yearly migration is extraordinary. It seems there is still much to be discovered about our world. Each day brings an opportunity to explore this amazing world, our universe, and the creatures that inhabit it.