Would you travel into space by way of a balloon? Read on to learn more about a new balloon spaceship.

Thanks to a start-up company specializing in space balloons, people wanting to travel into space will have another option. Jane Poynter and Taber McCallum own space Perspective. Poynter and McCallum own another company that deploys sensors to the stratosphere attached to balloons to capture space imagery. The new space travel company has completed its first unmanned test flight of a giant balloon spaceship. They have plans to take humans to the edge of space by 2024.

This past week, Space Perspective launched their balloon from Cape Canaveral in Florida. It reached its pre-planned altitude of 108,409 feet, where it hovered for six hours. Eventually, it splashed down in the Gulf of Mexico. The company was thrilled by the success of its first flight.

“It is a great privilege launching from the space coast, where the history of human spaceflight was forged over the past decades and continues to build momentum today. Flying on Spaceship Neptune will be an extraordinary experience for our Space Explorers,” said Poynter.

The balloon neared Earth’s stratosphere, which is a layer of Earth’s atmosphere. It is the second layer of the atmosphere as you go upward.

What type of accommodations would one expect on a balloon ride into space?

The Spaceship Neptune capsule can accommodate a pilot and eight passengers. The balloon spaceship will feature seats, a bar, a bathroom, and huge windows. These windows will allow for great views of Earth against the blackness of space.

“That is really what this is all about,” Poynter said during today’s news conference. “Everybody should be able to see the Earth from space.”

Spaceship Neptune will spend about two hours getting up to a maximum altitude of about 100,000 feet (30,000 meters). It will be pulled gently upward by a 650-foot-tall (200 m) balloon filled with buoyant hydrogen. The capsule will spend about two hours high in the stratosphere, above 99% of Earth’s atmosphere. Then. It will spend another two hours coming back down again for a total flight time of six hours. The recovery ship will fish the capsule out of the ocean. Currently, Space X uses the same recovery system with its Dragon space capsules. 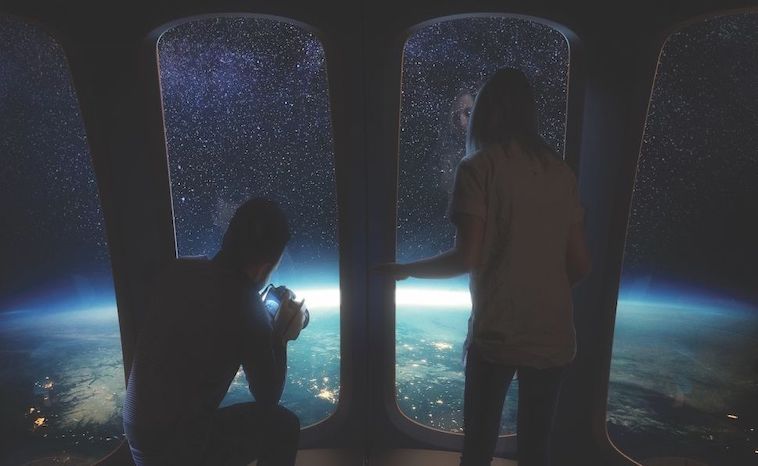 A Ticket to Ride

The company plans that Spaceship Neptune will launch from the old Shuttle Landing Facility at NASA’s Kennedy Space Center on Florida’s Space Coast. It will head east out over the Atlantic Ocean on winter flights and west over the Gulf of Mexico during the summer, a seasonal shift dictated by the prevailing winds.

Space Perspective has not yet set a price for this balloon experience, but “a ticket will likely sell for around $125,000 initially,” said MacCallum and Poynter. However, if someone does not have the money, they still may have the experience. The nonprofit Space for Humanity has chosen Space Perspective as a “preferred partner” for its Citizen Astronaut Program. As part of their program, they will pay for the flights of selected folks who will serve as space ambassadors after returning to Earth.

The company is encouraging people to sign up for a seat aboard the capsule. No money is due at this time. However, those that sign up early will have the first choice of seats. Are you ready to fly into space on a balloon?