Astrobees Working on the Space Station

Imagine having an extra pair of hands to help you each day? At the International Space Station the astronauts are getting some new helpers. Read on to learn more about astrobees.

The International Space Station astronauts are getting some new helping hands in the form of robots. These flying robots are referred to as astrobees by NASA scientists and developers. Don’t worry though, these handy helpers do not have stingers.  They are part of program to update the space station and replace the current sphere robots (Synchronized Position Hold, Engage, Reorient, Experimental Satellite). Sphere satellites test hardware and software for Earth-based researchers. The sphere robots have been in service for the past ten years. What new features will the astrobees have?

First, let’s find out their names. The three free-flying, cube-shaped robots are named:

Queen is still back here in the hive awaiting for its chance to go to the space station.

The little robots can each carry multiple science payloads. In addition, they collect data as they float around the station. How do they move along? Each one has a propulsion system made up of electric fans to push them forward. Their sensors will detect radiation, carbon dioxide and more. The Astrobees also have built-in cameras that can help them to “see” and navigate around the space station. The robots each have a “perching arm,” which allows them to grab handrails or grab and hold items. However, they have limited capability of grabbing things, as their arm is not very dexterous.
The bots feature a touch screen with glowing “eyes” and blue indicator lights.  These lights signal to the astronauts whenever the built-in microphone is activated. This way the astronauts know if the Astrobees can “hear” what they are saying.
Maria G. Bualat, Astrobee project manager at NASA’s Ames Research Center, said, “The Astrobee robots function autonomously and can also be controlled either by the astronauts on the space station or by flight controllers and researchers back on Earth.” 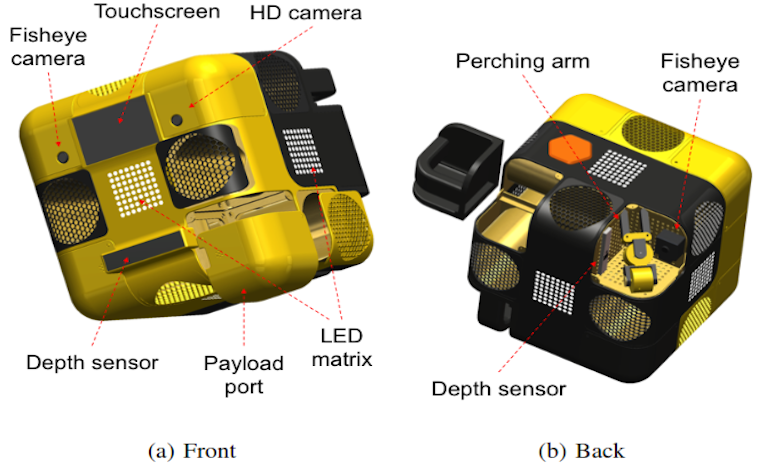 One of the main functions for the astrobees will include helping the scientists and engineers aboard the ISS. The U.S. Operating Segment will control the robots remotely from the ground. The robots are designed to help scientists and engineers develop and test technologies for use in microgravity. In addition, they can assist astronauts with routine chores. These chores include sampling, logistics management, and crew monitoring. Each astrobee can complete up to three chores. This assistance allows astronauts to dedicate their efforts to other science and engineering duties. Ground controllers will have additional eyes and ears on the space station.

On future spacecraft, robots like the Astrobees could someday monitor the ship. For example, they could fly around and look for problems in structure.  In addition, they can maintain onboard systems, even if astronauts are not present. Depending on their zero-gravity function astrobees may assist in moon habitats.
Furthermore, they may assist in Mars home habitats. With each passing year, the technology improves for their continued use. Their usefulness seems to only become greater with each improvement in their system. We will watch for further developments in the astrobee robot systems.