Earlier this year scientists discovered the location of an asteroid strike in Western Australia. Read on to learn more about the asteroid strike and how it changed the Earth.

The Outback of Australia refers to a remote and dry region of Australia that takes up most of the continent. The Outback is sparsely populated, but it is home to a large variety of animals and plants. Aside from strange plants like the Red Kangaroo Paw, and animals like the Kangaroo, Australia is also home to the Earth’s oldest asteroid strike.

Looking at a map of Western Australia, one would discover the town of Meekatharra. It is here that scientists from Curtin University studied the Yarrabubba impact structure. The Yarrabubba impact occurred during a period in Earth’s history called the Proterozoic eon. Long before plants, fish, or dinosaurs, life at this time consisted of simple, multicellular organisms.

These simple bacteria had already begun changing the composition of air. Carbon dioxide and methane dominated the air. Earth’s atmosphere gradually became oxygenated by life about 2.4 billon years ago.

As oxygen levels built up, rocks started weathering more, and the atmosphere cooled down. And then ice came, plunging Earth into globally frigid conditions.

During this time, the planet was covered in ice, which scientists refer to as the “Snowball Earth”. They speculate that when the asteroid hit Western Australia, it broke up the ice-covered Earth. Furthermore, it left a 70km diameter crater. The impact sent the ice into Earth’s atmosphere, where it changed into a vapor. Scientists conclude this one strike lifted the Earth out of its deep freeze. Ice disappeared for hundreds of millions of years. What evidence did the scientists find to reach this conclusion? 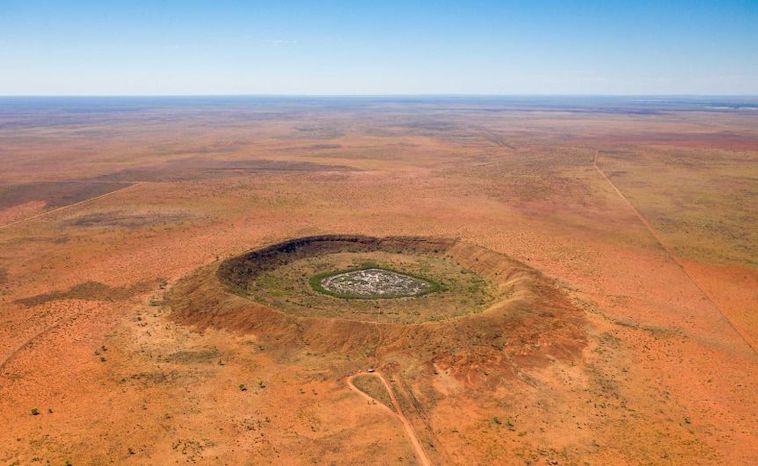 No circular crater remains at Yarrabubba; however, the structure has an elliptical shape. After billions of years, the crater shape has eroded. However, scientists found shocked quartz and shatter cones within the crater. Their excitement grew upon identifying these remnants of a meteor strike.

Shocked quartz is a form of quartz that has a microscopic structure that is different from ordinary quartz. Under intense pressure, the crystalline structure of quartz is deformed along planes inside the crystal. Shatter cones are distinctive cone or fan-shaped features in rocks, with separating fracture lines that look like a horsetail. They are found in only two places on Earth, 1) in nuclear test sites, and 2) meteorite impact structures.

Shatter cones form as a result of the high pressure, high-velocity shock wave. This shock wave is made a sizeable impacting object or a massive explosion. These cones range in size from less than 1 centimeter to more than 5 meters across. In addition, they indicate that the original rock shattered.

How Old Is It?

Once they determined that the crater came from an asteroid strike, they set out to determine its age. Geologists date events using “isotopic clocks” in minerals like zircon and monazite. These minerals contain small amounts of uranium, which gradually decays into lead at a known rate.

Asteroid strikes raise the temperature in rocks. As a result, minerals in those rocks lose their accumulated lead. As time wears on, the rocks start to accumulate lead once again. By measuring the isotopes of uranium and lead in these minerals, scientists can calculate how much time has passed since the impact.

According to scientists, the asteroid hit the area about 2.2 billion years ago. It is some 200 million years older than the next oldest, the Vredefort impact in South Africa.

Scientists continue to study the area.