Scientists are aware of nearly 25,000 near-Earth asteroids and comets. Fortunately, none of them are a threat to Earth. Read on to learn more about the Asteroid Defense System.

What happens if scientists discover an asteroid on a collision course with Earth? Do they have asteroid defense plans, and what do those plans look like? The “National Near-Earth Object Preparedness Strategy and Action Plan” is an 18-page document that outlines the steps that NASA and the Federal Emergency Management Agency (FEMA) will take to prevent dangerous asteroids from striking Earth. In addition, it will prepare the United States for the potential consequences of such an event. “This plan is an outline to enhance the hunt for hazardous asteroids. It also can predict the chances of being an impact threat well into the future. Furthermore, it can see the potential effects that it could have on Earth,” NASA’s planetary defense officer, Lindley Johnson.

Every two years, a team of scientists at NASA and elsewhere meet at the Planetary Defense Conference. During this time, they create a fictional asteroid and build a scenario that is headed for Earth. As to replicate a real-life event, they reveal information over the course of several days. This mimics a real discovery and tracking process.

In addition to the scientists, other community members join in the exercise. For example, asteroid scientists, lawyers, spacecraft engineers, and emergency response personnel think through what challenges they would face. From there, they would have to decide what choices they would make and what information or plans they wish they had.

This year the scientists created the asteroid 2021 PDC. Initial observations tell scientists that it’s somewhere between 100 feet and 2,300 feet across (35 to 700 meters). At the very first sighting, there’s only a 1 in 2,500 chance that 2021 PDC will hit Earth. However, within a week, additional observations have increased that risk to 1 in 20. At this level, international organizations become concerned.

Many of the impact scenarios would see 2021 PDC exploding harmlessly over an ocean. In fact, the asteroid has a whopping 97% chance of causing no damage. It’s the other 3% that worries experts. The scenarios in the 3% category could see tens of millions of people impacted by the event.

“We can see right off the bat that we are faced with a very challenging scenario here,” said Lorien Wheeler, an engineer at NASA’s Ames Research Center in California. “One that could threaten almost any region of the world. Furthermore, one that combines a high likelihood of causing no damage with a small chance of causing extremely catastrophic levels of damage.” 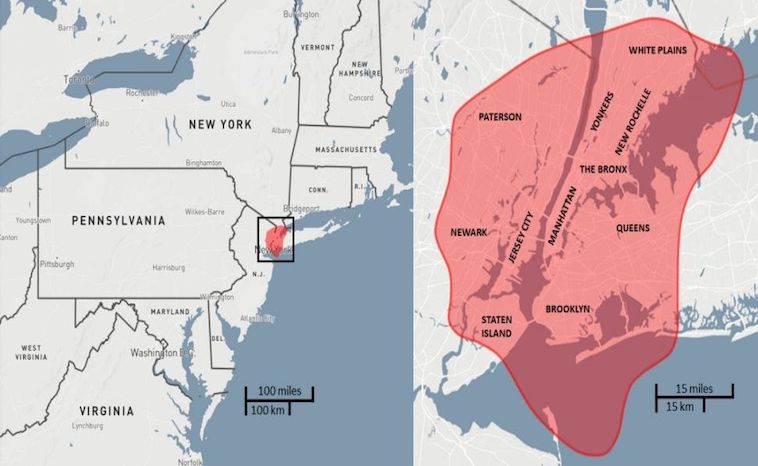 This graphic depicts the spatial extent of the damage if an asteroid measuring roughly 100 feet (30 meters) wide were to hit New York City. An asteroid that size famously exploded over Siberia on June 30, 1908. Known as the Tunguska event, this was the largest asteroid impact in recorded history. (Image credit: National Science & Technology Council)

1. NASA is directed to enhance the nation’s capabilities for detecting, tracking, and characterizing near-Earth asteroids. In addition, they plan to “reduce current levels of uncertainty and aid in more accurate modeling and more effective decision-making,” the document states.

2. Improve “modeling, prediction, and information integration” across U.S. agencies. The goal is to help predict an asteroid’s probability of hitting Earth. Also, it will determine exactly when and where an incoming asteroid could strike.
3. As past as the asteroid defense system, NASA would develop new ways to deflect an asteroid heading toward Earth.
4. Plans to increase international cooperation to better prepare the rest of the world for the possibility of an asteroid strike.
5. Come up with a plan that would affect if a large asteroid were found to be hurtling toward Earth.

The good news is that for now, none of these resources need to go into action. Will they in the future? Only time will tell.