In 2016,  NASA launched its OSIRIS- REx space probe to study the B-type asteroid Bennu. The asteroid completes an orbit around the Sun every 1.2 years, and every 6 years comes very close to Earth. Asteroids are the bits and pieces left over from the formation of the planets. As a result, they serve as basic blueprints of the early solar system. Studying them allows scientists to see how the early solar system appeared. Furthermore, they learn how the planets formed. Since arriving at Bennu in December of 2018, NASA worked to locate a landing point for OSIRIS-REx.

On October 21, 2020, OSIRIS-REx touched a rocky region of Bennu called Nightingale. NASA stated that Nightingale chose this site after studying the asteroid for a couple of years. Scientists found that Nightingale had a clear spot when compared to areas covered in boulders. One boulder, NASA nicknamed Mount Doom, as it stands 10 stories high.

Using its Touch and Go Sample Acquisition Mechanism (TAGSAM), OSIRIS-REx made contact with the asteroid’s surface after an 11-minute descent. The contact lasted just 6 seconds and allowed the spacecraft to fire off a puff of nitrogen gas. As a result, the puff of gas blew tiny pieces of the 1,640-foot-wide (500 meters) Bennu into the OSIRIS-REx collection device. NASA stated that it would take about a week to confirm how much Regolith (dust and broken rock) made it into the chamber.

It was a high-stakes maneuver for OSIRIS-REx. The spacecraft only has three nitrogen gas canisters, and so three tries, to collect asteroid samples.

To complete all of the planned science, OSIRIS-REx needs to collect at least 2 ounces (60 g) of asteroid material. However, the goal is to collect 5 ounces (150 g) to account for any measurement errors. The spacecraft carries three bottles of nitrogen gas to allow for multiple collection attempts. Thankfully, it collected material on the first attempt. Reports say that NASA engineers and scientists celebrated with applause and cheers once they knew they had a sample.

“Today’s TAG maneuver was historic,” said Lori Glaze, Planetary Science Division director at NASA Headquarters in Washington. “The fact that we safely and successfully touched the surface of Bennu, in addition to all the other milestones this mission has already achieved, is a testament to the living spirit of exploration that continues to uncover the secrets of the solar system.” (NASA, 2020)

A Return To Earth

To weigh the sample in the low-gravity environment, scientists will measure the spacecraft’s angular acceleration before and after the sample is collected. Once they know they have the right amount, they can plan the return of OSIRIS-REx. In 2023, OSIRIS-REx’s sample return capsule is scheduled to bring a piece of Bennu back to Earth. First,  the spacecraft will conduct an in-depth study of the rocky body. Scientists want to learn more about how sunlight can shift an asteroid’s position. 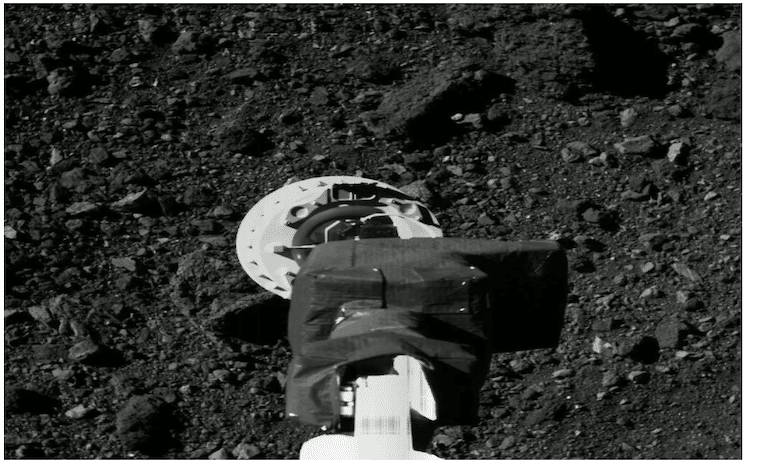 OSIRIS-REx has set two records over the past four years. First, it’s orbit around Bennu represents the smallest body a spacecraft has ever orbited. The space rock has a diameter of 1,640 feet or 500 meters. Second, OSIRIS-REx performed the closest orbit ever of a small body, at just 1 mile (1.6 kilometers) from the surface. NASA’s research into asteroid Bennu will continue for a couple more years. Will they find more information about planet formation? We excitedly await more reports from NASA.