This past week the former president of Poland made some startling remarks concerning alien invasion. Read on to learn more about his recent remarks.

When the former president of Poland made remarks this past week about an alien invasion, it raised a few eyebrows. One of the first thoughts that came to many people revolved around the idea that a man of his stature believed in aliens. Many people do not believe in aliens, and yet others are staunch believers in little gray men from outer space. Whether you believe in them or not, the remarks by Lech Walesa are quite interesting.

Lech Walesa served as Poland’s president from 1990-1995. During a recent speaking engagement, he told attendees that he has come to believe in the existence of aliens. Furthermore, he went on to cite his concern that they could pose a threat to human civilization.

“There are three levels of intellectual development in other galaxies, and sadly the human species occupies the lowest tier,” said Walesa. In addition, he stated that a visit from aliens to our planet might undo thousands of years of advances. “They will interrupt us and cut us in half. The Earth will collapse and set the human race back 5,000 years” said Walesa. What led him to this idea? He states that he has spent time researching this on the internet. Those that believe that all the governments of the world hide alien existence from the public found this information disappointing. However, this those that believe in Area 51 being the military site for aliens may conclude with President Walesa’s theory. 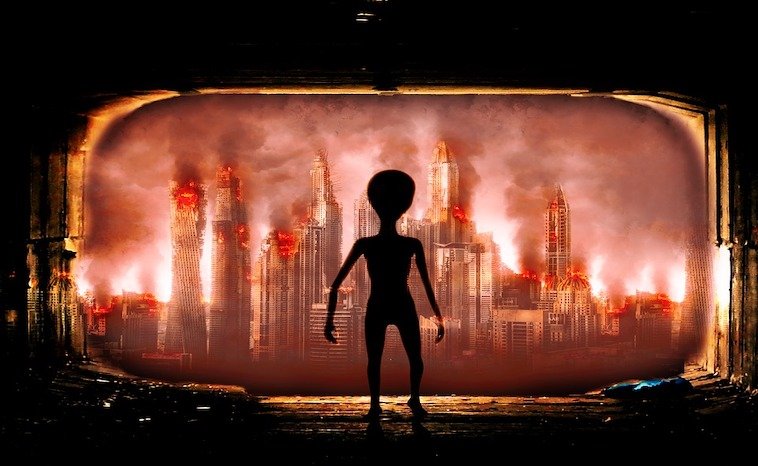 President Walesa also stated that we might have already reached this advancement in our society previously. “They say that there was a civilization like ours five or four times, and it came to the same mistake as we are now- they could not communicate,” said Walesa. For example, the people that built the pyramids had advanced knowledge of mathematics and geometry. The lost city of Atlantis that Plato cites in Timeaus and Critias would also count as another advanced civilization. What happened ? Where did these advancements in science and mathematics go? According to President Walesa, aliens wiped them out, and we lost that knowledge.

“Various things are excavated in stone, the pyramids, we do not know where they came from,” said President Walesa. He did not give examples of these things, but the assumption is that these are objects not made by man.

Starting Back At The Beginning, Again

Let’s assume that President Walesa is correct. Where are these alien invaders today? Why have they not come back since the time of the Egyptians? Have they come back and decided to leave us alone? Are we minutes away from a War of the Worlds-style invasion? If that is the case, then the world governments have a responsibility to protect humanity. At this point, we do not see preparations for alien attacks so that President Walesa may be correct. If we are invaded tomorrow, then the potential exists that mankind will be forced to start over. New civilizations would have to figure out the invention of so many things that we take for granted today. GPS, cell phones, cars, airplanes, and those types of items may cease to exist again for another 5,000 years.

Let’s hope that President Walesa is wrong in his theory.