There has been speculation concerning visits from aliens since the Roswell incident in the 1940s. However, a new book coming out by Harvard professor and physicist Dr. Avi Loeb makes the case that aliens have indeed visited Earth. Read on to learn more about Dr. Loebs’s evidence and ideas.

In 2017, an object named Oumuamua passed by the Earth. People believed that it was nothing more than a comet visiting from another galaxy. As we wrote in a previous article, the NASA explanation for the object made it seem completely innocent until they didn’t.

“NASA originally classified it as an asteroid. However, it did not show signs of asteroid activity after it went past the Sun in September 2017. Traveling at a speed of 196,000 miles per hour (87.3 kilometers per second), Oumuamua accelerated slightly, and now NASA has it listed as a comet. The researchers added to the alien theory by writing, “The object might be “a fully operational probe sent intentionally to Earth vicinity by an alien civilization.” (OSR, 2021)

In his new book, Extraterrestrial: The First Sign of Intelligent Life Beyond Earth, which comes out on January 26, Loeb makes a persuasive scientific argument about ‘Oumuamua’s otherworldly origins. Furthermore, he explains why his peers seem hostile to the idea of life outside of Earth. According to Dr. Loeb, scientists do not want to admit to the possibility of alien life because it threatens their careers.

“Overall, about a quarter of our galaxy’s 200 billion stars are orbited by planets that are habitable the way Earth is. They have surface conditions that allow liquid water and the chemistry of life as we know it,” he writes. “Given so many worlds … with similar life-friendly conditions, it’s very likely that intelligent organisms have evolved elsewhere.” The opposition to even the mere concept of extraterrestrial life boils down to conservatism. Many scientists adopt this idea to minimize the number of mistakes they make during their careers.” 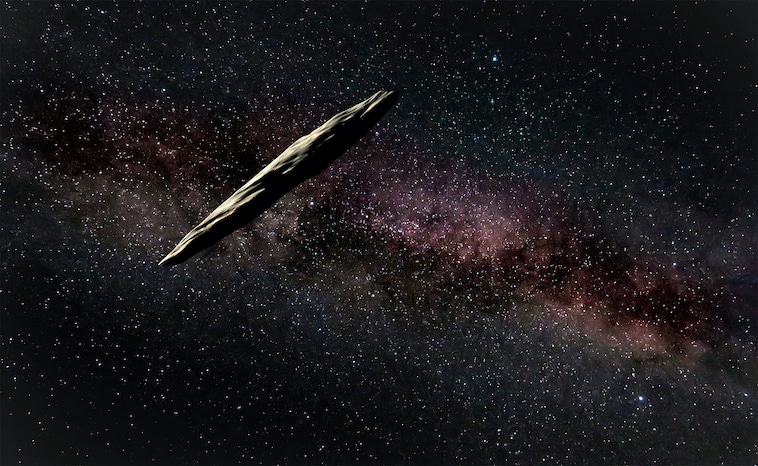 Characteristics Not Becoming of a Comet

As mentioned above, Dr. Loeb studied three characteristics of Oumuamua. The first states that the object moved too fast. According to Dr. Loeb, it appeared that the comet had an extra push on it. It already had the gravity of the sun moving it along. However, this push appeared unnatural because, unlike other comets, this comet did not have a tail. A tail would indicate that gases moved the object forward.

Next, it had an unusual orbit. Oumuamua was tumbling and spinning. In addition, the brightness varied by a factor of ten as it was tumbling every eight hours. What makes this unusual? Dr. Loeb suggests that the object, based on geometry, is completely flat. The light reflecting off the surface supports this. This led him to speculate that Oumuamua may represent a part of an alien spacecraft. Did something break away from a UFO, causing it to tumble and spin through space? This certainly does not sound like a “dirty snowball” as a common characteristic of comets.

Dr. Loeb has enough argument to his theory that he wrote a book. It should be a fascinating read and open circles to debate on whether his point is valid.