When supermassive stars die during a supernova event, they can cause the formation of new stars. Read on to learn more about this event.

Scientists have questions related to the formation of the new stars. Questions such as what particulates make the new stars? What makes stars massive like Betelgeuse, or small like our Sun? They believe that an accretion burst mostly determines the outcome of the newly formed star. Furthermore, researchers want to know what makes a supermassive star in the first place.

The problem that surrounds these questions resides in the fact that stars are located far away from our Earth. They also form near other massive stars, making it difficult to study the environment where they take shape. One theory, though, is that a rotating disc of gas and dust funnels materials into the budding star. 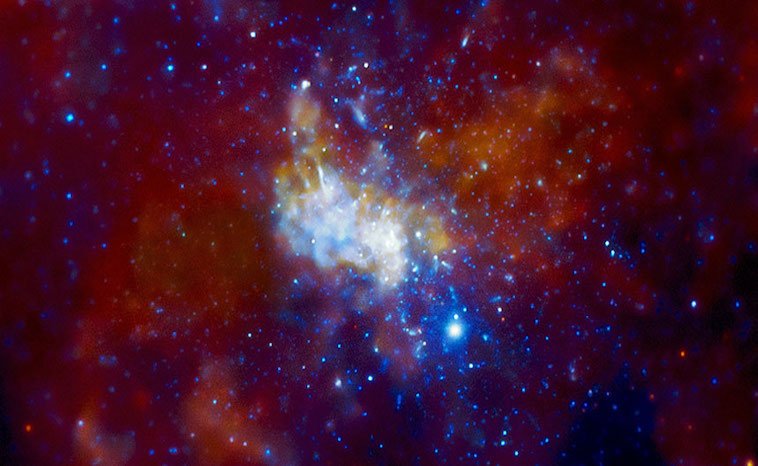 Scientists think that the newly forming star takes time to accumulate matter and grow in size. Further, the time varies, which has them wondering as to why. Sometimes the forming star swallows up a considerable amount of concern. As a result, the massive star incurs a burst of activities. This burst of action is known as an accretion burst.

Due to the time variance, newly formed stars show different levels of luminosity. In addition, quiescent periods between accretion bursts can promote disk fragmentation and giant planet formation. To date, scientists recorded three accretion bursts in the Milky Way galaxy. Researchers documented the first one in 2016.

In order to measure or track these bursts, scientists used a special laser called a maser. A maser is a microwave or radiofrequency equivalent of a laser. The word stands for “microwave amplification by stimulated emission of radiation”. Masers are observed using radio telescopes. These lasers brighten when they capture an accretion burst. Not only do scientists see these burst they have captured but a heatwave pattern as well. On pasts bursts, they have documented a heatwave coming from within the forming star that radiates out for several weeks.

In January 2019, astronomers at Ibaraki University in Japan noticed a bright stat. The supermassive protostar, G358-MM1, showed signs of new activity. The masers associated with the object brightened significantly over a short period. The last couple of weeks have seen little bursts. However, scientists believe that more bursts are yet to come.

“Our models suggest that due to the intense radiation emitted, a star should not grow much bigger than eight times the mass of our own Sun. But high-mass stars don’t seem to care about our models, and we know that stars tens of times the mass of the Sun exist out there,” said Ross Burns, from the National Astronomical Observatory of Japan

While scientists watch this burst, they make note that it does not look like the same type of explosion seen previously. For example, this burst has a heatwave blast. This leads them to believe that accretion bursts may come in many different types. They want to know if the accretion bursts differ overtime during the formation of the star.

It seems the search to find answers to our questions may take a long time to answer. Accretion bursts remain elusive and rare. Optical telescopes cannot see through the thick gas clouds that cover these bursts. As technology advances, astronomers may one day find the answers that seek.