According to NASA, millions of pieces of space debris are tracked orbiting Earth – most of these are about the size of a marble or larger, while around 20,000 are larger than a softball – although, most of this floating “garbage” usually burns up in our atmosphere, Scientists are tracking one chunk of junk that is predicted to make entry on November 13th, 2015 over the Indian Ocean near Sri Lanka.

The Catalina Sky Survey (CSS) – a project based near Tucson – continually searches the sky for comets and asteroids, in particular those that could potentially impact Earth. Here they detected the object on October 3rd, but soon realized their astronomers had already imaged this object in 2013. This was an excellent find as it allows scientists to compare both observations to determine the object’s orbit and also what it may be. 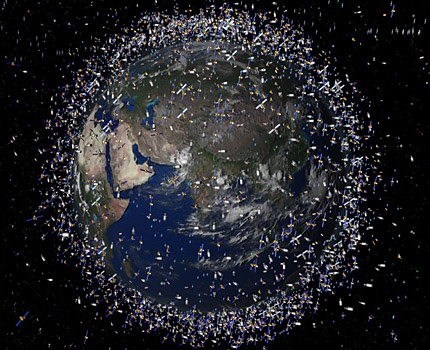 One of the many observers from around the globe, Nick Moskovitz (Lowell Observatory) gave a statement;

“Its orbit shows us that the object will undergo a close encounter with Earth this week, so we’ll be able to collect data on it.”

Moskovitz plans to study this object with the SOAR (Southern Astrophysical Research) telescope located in Chile and from here will collect spectral data and images. Moskovitz says;

“Artificial objects can have a coat of paint on their surfaces, and oftentimes that paint has titanium oxide in it. This does not occur naturally, so if the object’s spectrum indicates the presence of titanium oxide, we can know it’s definitively artificial.”

He goes on to inform us that the chunk of debris will most likely measure in at around three to six feet (1.8 meters) in length and tells us; <em>“we don’t know what it is so we don’t know its shape and how it’s going to fragment. A piece of a solar panel, for instance, would behave differently than a booster tank. There is certainly the possibility that pieces could make it to the ground, though I think it’s unlikely.”</em>

Scientists are excited for the entry of this man-made object as it allows them to study the effects of space debris and how it’s processed as it shoots through our atmosphere at around seven miles-per-second (11.2 kilometers-per-second). One team member, Peter Jenniskens of the SETI Institute in California, is exploring the possibility of chartering a private plane to witness the event up close.

Having a hunk of junk hurtle towards our planet may seem a little unnerving but the Department of Defense does keep track of these stray objects and in fact each one is catalogued. The DoD’s Space Surveillance Network tracks objects as small as two inches (five centimeters) in Earth’s low orbit, up to those that measure in at one meter in “geosynchronous” orbit (having the same orbit as the Earth). Right now there is officially 15,000 objects catalogued that are still in orbit, while the total number still being tracked lies around the 21,000 mark.

The risk of space debris colliding with the Earth and causing serious damage is remote as it usually burns up upon entry. For this reason we can rest assured that we are safe; however, that doesn’t mean we can’t keep our eyes open for strange objects zipping through our night skies.