The year of 2015 has past and all it had to bring a memory, but 2016 is shaping up to be an exciting time in not only astronomy, but also space exploration. Let’s discover what’s on tap for this new year.

January 4th. Get ready for some meteor shower excitement in the wee hours of January 4th, as the little known Quadrantids meteors are going to be putting on a show. Originating from the debris left over by the asteroid 2003 EH1 and named for an extinct constellation, Quadrantids will average about 40 meteors per hour (under good conditions). However, unlike other meteor showers, this one has a very narrow peak and will only be visible between midnight and dawn the morning of Monday, January 4th, so get out there and enjoy.

February 6th. Mercury, Venus and the waning crescent moon will appear together on this morning for a rare trio-appearance.

March 8th. Jupiter will be its biggest and brightest and visible all night long on this date and it will be opposite the sun in our skies.

March 23rd. Albeit more of a scientific interest than an observatory one due to its barely discernible nature, there will be a lunar eclipse on this date.

May 9th. A rare view of Mercury is on schedule for this day. The planet will pass between Earth and the sun silhouetting the planet beginning at about 8:13 a.m., and approximately 10 degrees above the horizon an hour after sunrise. According to experts;

“Mercury will make first contact along the southeast edge of the sun’s disk. It will appear as a dark disk about 160 times smaller than the sun progressing northwest across the face of the sun before making a loop to the south around 1 p.m. The show will be over as Mercury exits along to the south at 3:41 p.m.”

May. This is blue moon month (no it won’t appear to be blue) but it is significant as it the third of four full moons in an astronomical season.

May 22nd. Mars will be its closest to Earth. In the southern hemisphere the red planet will be just a few days from the Spring equinox which means you may be able to spy those polar ice caps with binoculars and smaller telescopes.

June. This month is an excellent time to look for the International Space Station passing by as the Sun will help illuminate it making it appear very big and bright.

June 2nd. Look for Saturn’s rings on this night as its rings are expected to be very bright due to the Seeliger effect (the brightening of a rough surface, or an object with many particles, when illuminated from directly behind the observer). This allows the shadows within the rings to disappear when the planet is fully illuminated.

August 16th. Mercury will be visible on this day as it reaches its maximum distance from the Sun. For best viewing look to the western horizon after sunset.

August 27th. Venus and Jupiter will appear together about 1/15th of a degree apart. Look to the west after sunset for optimal viewing.

October 19th. The first of three Super-moons is on this date as the full moon is at its closest orbit to Earth. 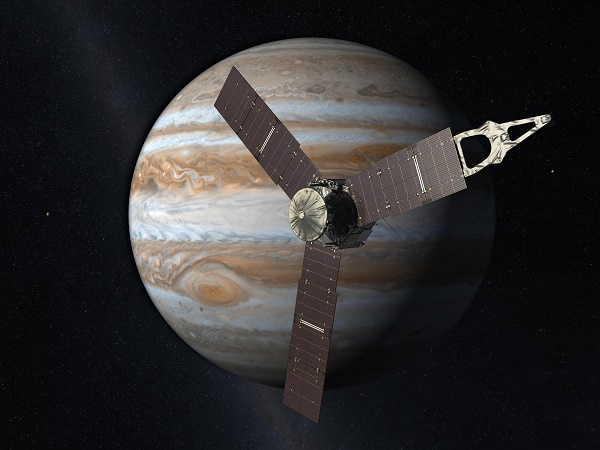 July 4th. The Juno spacecraft is on track to enter Jupiter’s orbit. This exploration is particularly exciting as it is the first mission to the outer planets not relying on nuclear power, but instead it is using three school bus-sized solar panels. Juno is going to be exploring this planet’s magnetic and gravitational fields over the next 20 months and also take a peek into Jupiter’s atmosphere.

OSIRIS REx. The Origins, Spectral Interpretation, Resource, Identification, Security, and Regolith EXplorer is planned for launch in September. The mission plans a rendezvous with asteroid 101955 Bennu in 2018 and sample return in September 2019.

This year (2016) is definitely going to be an exciting foray for both astronomers and scientists around the world. Don’t let this year slip by without taking a peek into the night sky to view all it has to offer. Who knows? You may just catch a glimpse of something remarkable and unplanned in your very own slice of outer space.