Did a man in Layter Close, England witness the making of a crop circle? Read on to learn more about this mysterious event.

The formation of crop circles entered the public domain in the late 17th century through a woodcut pamphlet. Since that time, many people have claimed crop circles forming in their fields. However, the public remains skeptical of such occurrences. Remarkably, after witnessing people making circles themselves with boards and ropes in cornfields. Whenever a new event gets reported, Alas does stir the UFO pot that aliens have once again visited the Earth. Here is the latest report that has piqued the interest of crop circle enthusiasts.

Martin Hoult, who lives in Layters Close, Chalfont St Peter, told the Bucks Free Press he was woken up at around 1 am from a bright light coming from outside.

He said: “I first thought that it was a security light or the moon. There was no sound, so I thought I would investigate. I opened one of the windows in my bedroom, looked outside and I could see the light. It was a pure bright white great dome of light. That’s the only way I can describe it. It was perfectly white, like an opaque bulb. The dome was about 150 feet wide and around 30 feet tall – absolutely enormous.”

Mr. Hoult said he continued to listen out for any sounds but did not hear any and then fell back asleep.

In the morning, he went to vote and, on his way back, met a neighbor and asked her if she had seen anything. He said: “She said she hadn’t, so I told her what I saw, and she said, ‘let’s go take a look in the field.’

When the pair got to the nearby field, Mr. Hoult said they saw a giant crop circle “about 150 feet wide one way and 50-60 feet the other way” in the middle of it. He added: “All the grass is flat, but the weeds are standing upright. And the tops of all the trees further down on Mumford’s Lane are burnt.

“It’s very strange. I can’t say it was a UFO because it wasn’t flying, but it was definitely an unidentified object or light.” (BuckFree Press, 2021)

It seems that England sees the most crop circle activity. In southern England, circle-makers tend to concentrate on canola, barley, and wheat. These grow and are harvested in an overlapping progression. For example, canola grows from April through May. Next, barley grows throughout May and June. Finally, wheat grows from June until early September. In recent years the occasional rudimentary pattern has been found in corn, extending the crop circle season as late as October.

Are crop circles messages or mapping symbols for travelers? Crop enthusiasts believe that these symbols help UFO travelers navigate throughout the galaxy. Others believe that secrets codes lie embedded within the designs. Several books cite that sound activity and psychic powers may create intricate patterns. Studies show that some circles make audible snapping and popping sounds. However, no research has conclusively found the cause for the sounds emitting from the circles.

What did Mr. Hoult see outside his window? A UFO? We do not know for sure. However, for now, we can enjoy the fun in speculating. 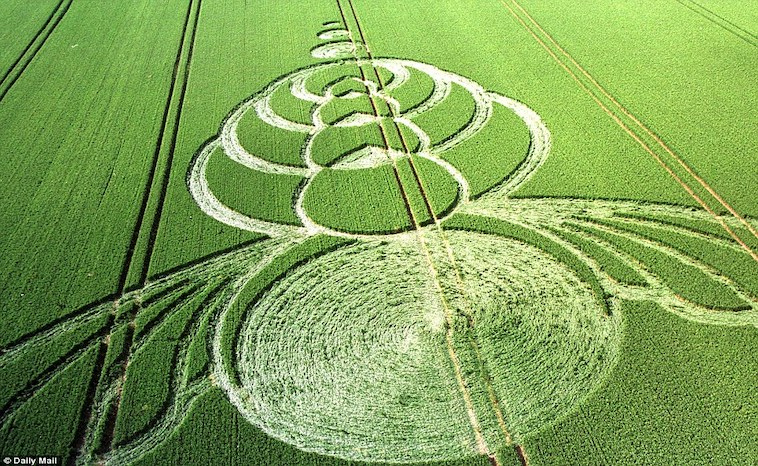