What If Earth’s Tilt Did Not Exist?

Our planet is tilted in a way that allows for seasons to exist. What would happen if the tilt changed or disappeared? Read on to find out how the Earth would change without its tilt.

Our planet can sustain life because of its perfect design. The four seasons, spring, summer, autumn, and winter, have helped civilizations grow and prosper. However, our Earth’s tilt is unlike any other planet in the universe. For example, Uranus sits almost sideways with its tilt, and Jupiter only tilts 3 degrees. How did Earth get tilted, and what would happen if the tilt did not exist?

Scientists believe that about 4.5 billion years ago, a catastrophic event caused the Earth to tilt. The giant-impact hypothesis, sometimes called the Big Splash or the Theia Impact, suggests that the Moon formed from the ejecta of a collision between the Earth and a Mars-sized planet. They suspect that this impact occurred in the Hadean eon about 20 to 100 million years after the Solar System united. Not only did the moon form from this event, but the Earth tilted at a specific 23.5°.

Since that event, the Earth’s tilt has changed several times. Currently, it’s tilt is set to 23.44°.  However, it varies between 22.1° and 24.5°. These changes explain the cycles of the formation and recession of glaciers throughout its history. These cycles, known as the Milankovitch cycles, also explain some of Earth’s climate changes. 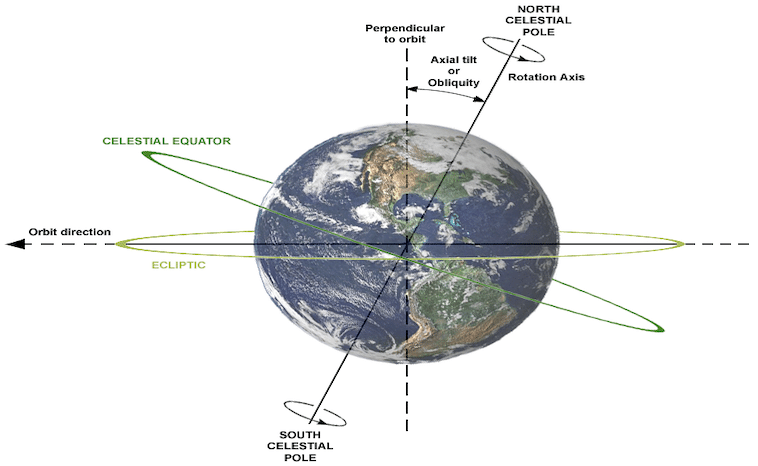 The Milankovitch cycles describe the collective effects of changes in the Earth’s movements on its climate over thousands of years. The term is named for Serbian geophysicist and astronomer Milutin Milanković. In the 1920s, he hypothesized that Earth’s tilt variations resulted in how much solar radiation reached the Earth.

Currently, we have a decreased tilt. This decrease promotes milder seasons like warmer winters and colder summers.  Overall we have a cooling trend. Most of the planet’s snow and ice lies at high latitude in the Arctic region. Scientists believe that decreasing tilt may encourage the onset of an ice age. Why do they believe this? They reference the history of times where decreased tilt led to the formation of glaciers. Less solar radiation at higher latitudes means more snow and ice.

If the Earth did not have a tilt, it would not have seasons. What would this look like? The Arctic and Antarctic regions would get sun every single day. As a result, the cold’s current fluctuations would not exist because of the lack of seasons. The region would remain cold all the time. The people living there could not acclimate to a constant cold temperature.

As a result, the only area habitable for humans would be near the equator. This region would resemble a rain forest with unrelenting rainfall. Planted crops could not grow due to soil erosion from the constant rain. Furthermore, winter serves as the necessary season for the reset of the other seasons. Without winter, insects and deadly diseases thrive, killing crops and people. Very few people could remain in a region with constant rains, insects, and disease.

Seasons are the engine that drives Earth’s habitability. Without our tilt, very few of us would exist on the planet. The good news is that we do have seasons, and the Earth works to sustain humanity.