What does a space launch feel like? Read on to know what one feels like and see if anything on Earth feels the same.

Many space movies try to depict the feelings of a space launch. Moviegoers see astronauts strapped to their chairs and hear the start of a countdown. Minutes later, the audience hears the rumbling of the spaceship and the astronauts brace into their chairs. How close does Hollywood have the real experience?

Today, astronauts ride along on a Russian Soyuz Capsule. Below is how astronauts describe the experience.

Several hours before launch, astronauts are strapped into their chairs. As they sit, they can hear the sounds of different noises. For example, they hear thumping and bumping. Valves open and close as the engines become pressurized. These sounds tell them that soon the spacecraft will start its mission to leave Earth.

After the valves open and the engines pressurize, they light. The lighting of the engines produces a low-frequency rumbling. As a result, things start to shake. Then the main engine lights and the rumbling and shaking get even louder. As one astronaut describes, “slowly, slowly, you begin to move up and away from the launch pad.”

Suddenly, speed begins to build, and the force of gravity increases. He explains, “You shake and rattle along, and then there is a bang when the rescue system is jettisoned. Then, another bang, when the four strap-on boosters separate, and another bang when the nose faring comes off.”

As a result, the windows are uncovered, and light floods the cabin.  At the second stage separation, there is another bang, and the g-load drops immediately. Up to that point, the astronaut feels about four and a half g’s of force. G Force describes the amount of pressure against the human body brought on by Earth’s gravity. When the g-load drops, the astronauts feel about one and a half or two g’s.

Then the third stage engine lights. At this point, the astronauts feel a big push forward, and the g-load builds again. Eight and a half minutes after launch, there is a loud bang and jerk. The last section of the rocket is ejected from the Soyuz spacecraft. As a result, the astronauts now enter space. They feel like they are hanging upside down in their shoulder harness. This is simply because nothing is pushing you back into your seat anymore. Everything floats, including you. (NASA, 2020) 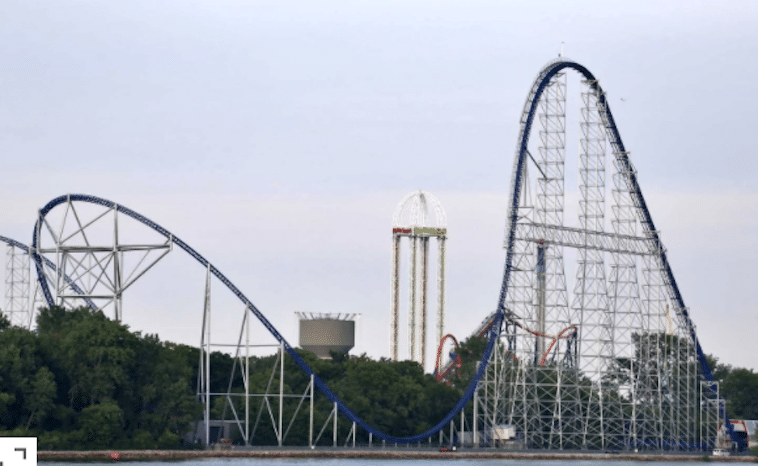 Can a roller coaster ride mimic the same feelings? According to aerospace engineer Nancy Hall, they can.
“Amusement parks are a great place to learn about spaceflight because a lot of the sensations you feel on roller coasters, like free fall and acceleration, are the same sensations that astronauts experience,”

The Millennium Force is a 310-foot-tall roller coaster at Cedar Point Amusement Park in Sandusky, Ohio. People that ride the coaster experience feelings similar to astronauts. After cresting the first hill, the ride plummets 310 feet at 93 miles per hour. Riders experience their bodies rising unwillingly from their seats. Roller coasters cause a series of low- and high-gravity sensations that mimic the free falls and accelerations of airplanes and spacecraft. As a coaster reaches the bottom of a hill or goes around a curve, the people feel their bodies pressing into their seats.

How about you? Have you experienced something similar to a space launch?