What Are Wormholes and Do They Exist?

Do you know what a wormhole is? Have you ever read about one in a science fiction novel? Read on to learn more about wormholes in space.

Do wormholes exist in space? If they do, where do they come from? What exactly is a wormhole? Scientists tell us that a wormhole connects two places in space. Think of it as a long tube that extends from point A to point B. Also known as an Einstein Rosen bridge, wormholes come from a theoretical method of folding space and time. This theory allows you to travel instantly from one place to another. To understand this theory, take a piece of paper and mark a point and then mark another point. Draw a line from point to point. Then fold the paper in half and poke a pencil through the points. The hole you created would be the wormhole. 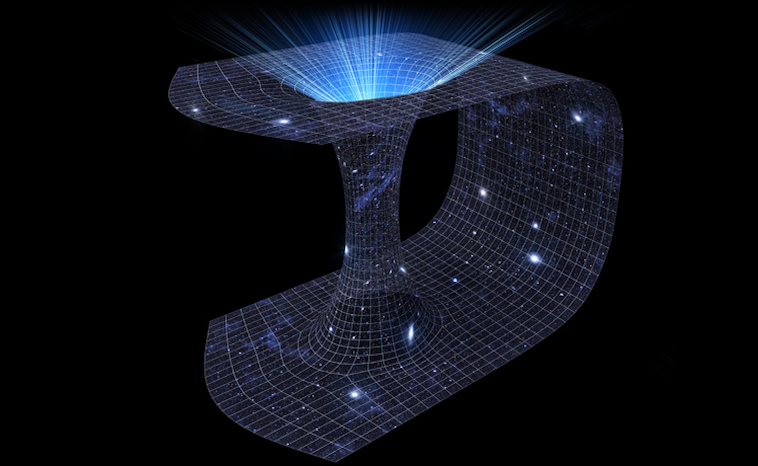 People often confuse gravity with magnetism.  Gravity is a force that acts between any two objects with mass. Regardless of their composition, the objects get pulled toward each other. However, magnetism depends on the specific structure of objects. It can either pull two objects together or push them apart. Magnetism and gravity can affect objects at a distance. As you pull them apart, they tend to get weaker. You are affected by the gravity of the Earth, but not from Mars or Venus.

According to Einstein Gravity warps space-time. When objects, such as a moon, circles a planet that effect does not occur from magnetism. It occurs from the gravity warp path created by the planet. If space-time wrapped around itself, it could potentially have two points share the same location. When you pull the points apart, they could still share the original location.

Let’s assume that physicists create a wormhole in a lab. Physics dictates that the wormhole could not act as a bridge. The science defies the ability to use it physically. Furthermore, how would they fix the instant problem of keeping it stable? To stabilize the wormhole negative energy would need to create a vacuum inside. Once a vacuum is established what would it take to keep it working that way? Another problem occurs with objects entering the wormhole. Let’s say that you have a stabilized wormhole and then throw a tennis ball inside. The tennis ball carries its own set of properties that essentially could break apart once inside or collapse the wormhole altogether. Some astronomers believe that wormholes may occur naturally in space the same way black holes do. They simply do not know enough to conclude with any certainty.

If Wormholes Did Exist

Of course, if wormholes did exist space travel would exponentially increase. Our ability to learn about planets and the galaxy could solve some mysteries of the universe. All things considered, travel through a wormhole would also allow for time travel. To go from point A to point B millions of miles apart would take hundreds of years. For people traveling within the wormhole, they would make the same journey in a handful of years.

One day we may discover the existence of wormholes in space. If and when we do, physicists and astronomers will have a whole area of science open to study.