In 1966 a strange UFO encounter was witnessed by hundreds of people in Melbourne, Australia. What did they see and why were they forced to keep quiet about it? Read on to learn more about this startling event.

ThelOn the morning of April 6, 1996, at approximately 11:00 am, school children and teachers at the Westall High School in Melbourne witnessed what many believe to be a UFO encounter. However, the incident was not widely reported beyond local newspapers. In fact, a couple of them ran cartoons making fun of the reported sighting. The Australian government refused to comment. An American physicist, Dr. James E. McDonald, known for his research into UFOs, interviewed a science teacher from the Westall school. He was the only person willing to report what became known as the Westall UFO encounter.

Andrew Greenwood was a science teacher at Westall High School and is the only staff member known to have reported seeing the object at the time. He gave a detailed account of what he saw to the newspapers.

“Greenwood told me the UFO was first brought to his attention by a hysterical child who ran into his classroom and told him there’s a flying saucer outside,” McDonald said. The following is what Mr. Greenwood reported.

“Mr. Greenwood first saw the object which it rose into view from beyond the pine trees at an area known as the Grange. Furthermore, he described it as a silvery streak “like a thin beam of light, about half the length of a light aircraft.” At first, it appeared with only a single aircraft, but was eventually joined by five. He described a “cat and mouse” game that the aircraft played with the object, a game which lasted a full 20 minutes.

“Every time they got too close to the object, it would slowly accelerate, then rapidly accelerate and then move away from them and stop. Then they would take off after it again, and the same thing would happen.” The object moved side to side, and its size appeared to fluctuate slightly. By the end of morning recess, Greenwood said he turned away, and when he looked again, the object and the five airplanes had gone.” 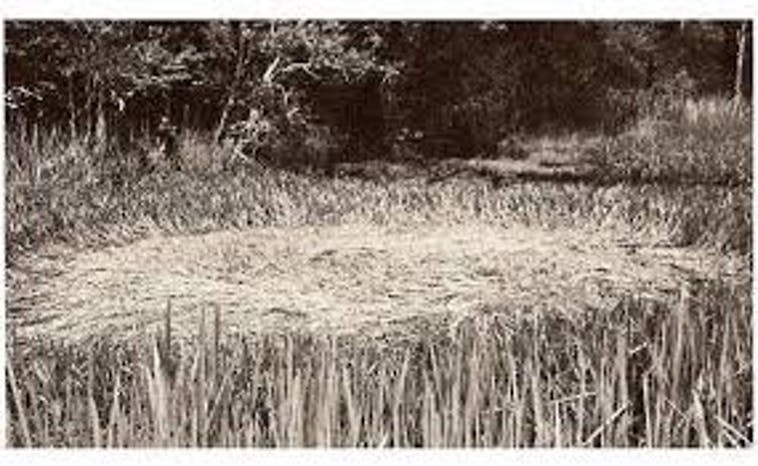 Grassy Area near the Grange

After the UFO left, students were brought inside. The headmaster at the school held an assembly. According to Mr. McDonald, the students were told the following.

“He gave the school a lecture and told the children they would be severely punished if they talked about this matter and told the staff they could lose their jobs if they mentioned it at all,” McDonald said.

Did hundreds of students see a UFO that morning? Apparently, initial reports were that a few students and some teachers saw something unusual.  The newspaper The Age, reported that a weather balloon launched from Laverton two and a half hours before the sighting. It launched 32 kilometers west-northwest of Westall. Even Greenwood described what he saw as a round, silver object about the size of a car with a metal rod sticking up in the air.

Furthermore, a RAAF navigator wrote a letter to the editor in the April 28 Dandenong Journal. In his letter, he stated that Greenwood’s reported a “reasonably accurate” description of a nylon target drogue. A target drogue would appear like a windsock, towed by one plane for the others to chase. The RAFF did use drogues at their nearby base. Did the RAAF report a training exercise at this time? It did not state either way.

What did the students and teachers see that day? Was it a UFO or simply a weather balloon or a drogue? The mystery continues. You can listen to Mr. Greenwood’s interview at this link.