Could Jupiter’s moon Europa support life? New evidence from NASA suggests that the life may exist in the water sitting below the surface. Read on to learn more about Europa’s potential life.

Jupiter has four large moons and at least 60 smaller moons. Larger telescopes and modern techniques are continually finding more small moons orbiting the planet. The four large moons of Jupiter called the Galilean moons after their discoverer, Galileo, formed about the same time as Jupiter. In 1997, NASA’s Galileo probe dropped beneath an altitude of 250 miles. Consequently,  its sensors twitched with unexpected signals that scientists were unable to explain at the time. Now they believe they know what the probe found.

When the Galileo probe flew close to Europa’s surface in 1997, it sent back information that puzzled scientists. According to new data, it flew through a giant plume of water vapor that erupted from the icy surface. As a matter of fact, they believe it reached a hundred miles high. The discovery has led some scientists to believe that the Jovian moon, one of four first spotted by Galileo in 1610, may hold promise as a place to hunt for alien life. “There were some anomalous features in that close pass in December 1997 that we never fully understood,” said Margaret Kivelson, a senior scientist on the Galileo mission and emeritus professor of space physics at the University of California in Los Angeles. “We went back and looked at them more carefully and found that they were just what you’d expect if we’d flown through a plume.” 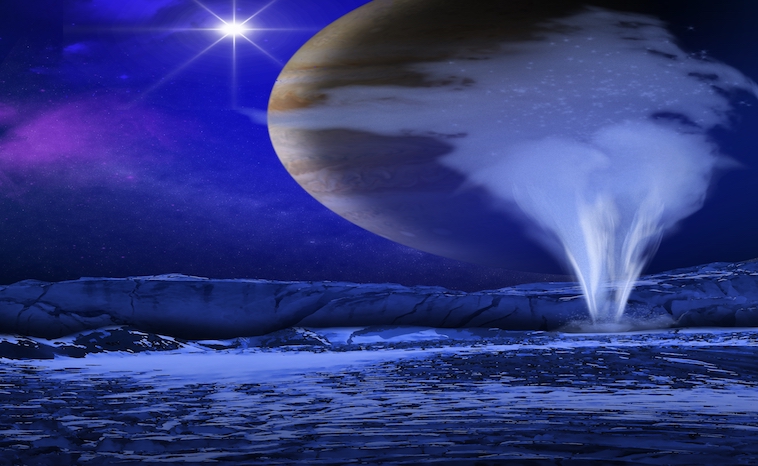 The visible surface of Europa has a very clean layer of ice, very few craters, and long cracks in the icy crust. Images show terrain that resembles blocks of ice in Earth’s Arctic Ocean. The pattern of mountainlike folds on its surface suggests that the icy crust breaks as the moon flex by tides. Europa’s gravitational influence on the Galileo spacecraft reveals that a liquid water ocean lies beneath the surface. They believe that the ocean may have a depth of 200 km (124 miles). The crust layer ranges from 10 to 100 km (6-62 miles) thick. The lack of craters reveals that Europa is an active world where craters are quickly erased.

Life in the Brine

Nasa and the European Space Agency has missions planned to fly thru more geysers and look for life. Presently, scientists believe that the vast subsurface ocean contains twice as much water as all the oceans on Earth. How could water exist at extremely cold temperatures? The surface temperature of Europa never rises above -160C (-256F). The warmth of the water comes from tidal heating. Jupiter’s gravitational field flexes the moon with varying tidal force. Consequently, the resulting friction heats Europa’s interior. As Europa orbits Jupiter it creates this tidal heating. Scientists think that life may exist around hydrothermal vents at the bottom of the ocean.

William Sparks, an astronomer at the Space Telescope Science Institute in Baltimore says the following:

“Europa is a moon of Jupiter that is about the same size as our moon, but it’s got more ocean on it than planet Earth, It is completely engulfed by this saline ocean which lies beneath a crust of ice, and in terms of a places to host extant life, I think it’s the best location that we’ve got beyond planet Earth. It would be good to find out what is really there.”

NASA will launch another probe in the 2020’s. With new technology aboard, they may find the alien life they are looking for.