Have you ever made plans to visit a special place? Maybe a theme park, zoo, or another country? What if you could visit space and stay at a hotel? “Impossible!” you say. Maybe not. A new space hotel may open by 2027. Read on to learn more about the Voyager Station hotel.

What does it take to build a space hotel? The Orbital Assembly Corporation (OAC) owners believe that they have the best design and ideas to build a hotel space. In order to build their design, OAC teamed up with the Gateway Foundation to raise money. After meeting with people who wanted to invest in the hotel, they raised $1,000,000 to begin their project. If everything goes according to plan, they hope to have the hotel ready for visitors by 2027.

Who would one ask to build a hotel in space? The Gateway foundation & OAC put together a group of NASA engineers,  pilots, and architects to get ideas on how to assemble the Voyager Station hotel in low Earth orbit (LEO). Of course, they first had to achieve gravity before making plans for a structure. Knowledgeable scientists figured out how to keep people from floating around the hotel. What was their solution? They plan to make a portion of the hotel rotate to create gravity, similar to that of the Moon.

Engineers plan to have the hotel built with three rings. The first ring is an un-pressurized structure with docking arms and stabilizers. They are designed to capture and lock in place a visiting spacecraft to unload passengers and cargo.  At first, it will have one docking port. However, they plan to add another so that two craft can be docked to the station simultaneously. All passenger and cargo access to the station will be through a set of pressurized access tubes.

The Outer Ring Truss is designed with a triangular unpressurized truss supported by a network of spokes to the Docking Hub. Inside this truss is an access tube that will allow people to move about the station freely. The truss will be the backbone of the station. It will hold the habitable modules, solar panels, radiators, and a rail transport system.

Below the Outer Ring Truss is a series of large, connected, pressurized modules. This is called the Habitation Ring. 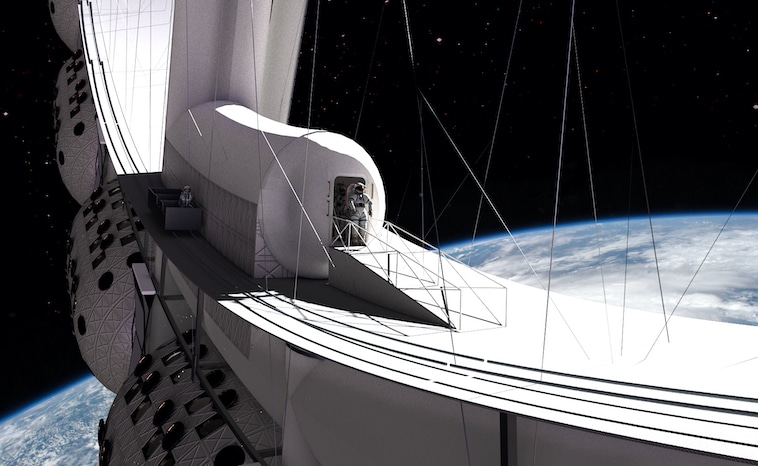 A 488-meter-wide wheel-will spin at such a speed that it could generate gravity. In the starting phase, the OAC plans to have 400 people visit the hotel. However, when the construction is fully complete, the hotel could have 1250 guests. The hotel would feature themed restaurants, viewing platforms, theaters, bars, libraries, gyms, and a spa. With the help of artificial gravity, the hotel will also feature running water, flushing toilets, and allow people to run & jump. Why would people want to run and jump? The gravity inside the hotel would only be 1/6th of the gravity here on Earth. This means they could jump a little higher at the hotel.

However, before they can have guests, the OAC needs to build structures and test for safety.

Currently, they plan to build models of the gravity rings. Once they find they are dependable, they will build these rings in low earth orbit. An initial ring is planned to be around 60m in diameter and form the research platform for the project’s next stages. The Gateway Foundation believes that within 3 years, they could have an operational research platform and an operating artificial gravity ring in space. With the help of companies like Space X to help get the materials in space, they hope to see the Voyager Station space hotel completed by 2027.