Out of all the planets, Uranus has the oddest tilt. It actually rotates on its side. Read on to find out what scientists now believe changed Uranus.

For decades scientists have tried to figure out why Uranus acts so different than the rest of the planets. Aside from the fact that it rotates on its side, it also radiates the same amount of energy that it receives from the sun. Its seasons run in 21-year cycles, meaning that winter lasts for 21 years, and so does summer.

Every time the planet rotates (about every 17.24 hours), Uranus’ lopsided magnetic field tumbles around, opening and closing periodically as the magnetic field lines disconnect and reconnect. When the magnetosphere opens up, it allows solar particles to bombard the planet. Then, when the magnetic field lines reconnect, this natural shield can continue to block the solar wind. What causes this strange behavior? Researcher Jacob Kegerreis, at Durham University’s Institute for Computational Cosmology in the U.K., believes a massive crash changed Uranus. In fact, he thinks a large, icy object crashed into the planet about 4 billion years ago. Furthermore, his team of researchers believes that this ice object was two times the size of Earth.

What About Its Atmosphere?

If something that massive crashed into Uranus, how did it maintain its atmosphere? Kegerreis believes that the object grazed the planet instead of directly hitting it. The researchers suspect that this object was probably a young protoplanet, made up of rock and ice. This collision is “pretty much the only way” that we can explain Uranus’ tilt, Kegerreis said.

Kegerreis also suggests that the collision caused debris to form a thin shell. As a result, the shell traps heat coming from the planet’s core. They believe that this has led to Uranus’ extremely cold outer atmosphere. 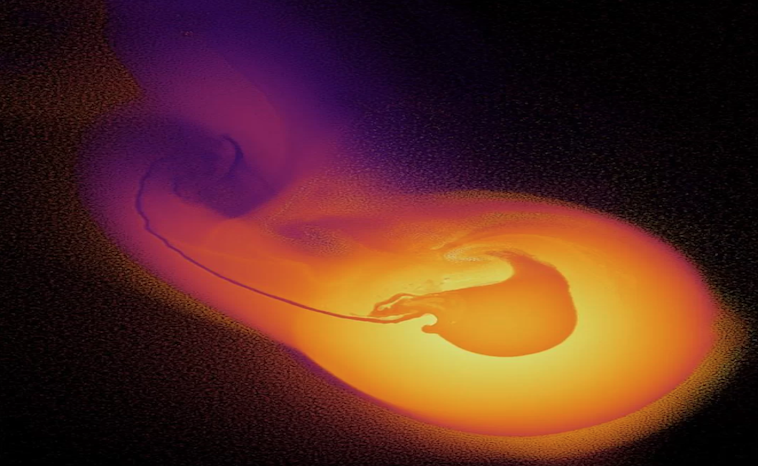 Could this same collision lead to the formation of Uranus’ 27 moons? Scientists believe so. According to Kegerreis, it could explain how and why some of Uranus’ moons formed. The researchers think that the impact could have knocked rock and ice into the young planet’s orbit.  Additionally, they think that the collision could have altered the rotation of any moons that already existed at the time. Furthermore, they believe the collision could have created molten ice and lumps of rock inside the planet, which tilted its magnetic field.

Miranda, the innermost moon, is only 14 percent the diameter of Earth’s moon. Its surface is marked by grooves called ovoids. Scientists suspect that internal heat driving convection in the icy mantle caused these. Rising currents of ice have deformed the crust and created ovoids. The other major moons have deep cracks, produced, perhaps when the interior froze and expanded. If a massive icy object did indeed crash into Uranus, this would explain the ice debris on its moons.

With the use of supercomputer models, the researchers believe that they have accurately concluded why Uranus differs among the other eight planets. Next scientists want to learn more about  Uranus’ chemistry and the different ways that an impact like this could have affected its atmosphere. This may lead to larger conclusions regarding the atmospheres on other planets.