Did aliens have a battle over Nuremberg Germany in 1561? Read on as we examine this fun topic of UFOs visiting Earth.

What did the people of Nuremberg, Germany witness in April of 1561? According to eyewitness accounts, hundreds of spheres, cylinders, and crosses engaged in battle in the sky above them. A broadsheet printed weeks later described the event. The broadsheet (newspaper), tells the story of the event and features an illustrated woodcut described by eyewitnesses. The woodcut, created by Hans Glaser now resides at the Zentralbibliothek Zürich in Zurich, Switzerland. Did Hans Glaser report a UFO battle? Or can science explain this event?

The incredible woodcut created by Hans Glaser reads like a space battle similar to Star Wars.

“Woodcut”- a print of a type made from a design cut in a block of wood, formerly widely used for illustrations in books.”

Woodcutters made relief images of events on wood. Cutting away everything except the lines or shapes creates the relief of the woodcut. Once complete, they inked the wood and applied paper with a press, which created an image on the paper. The rubber stamp and potato print are familiar forms of relief printing.

Based on documentation from the event, we know that Hans did not witness the event. As a woodcutter, he had the critical task of retelling a story from eyewitnesses. However, Glasser only had one page to do it on. Unlike today, where we have multiple photographs to report events, he had to get everything into one image. Religious symbols fill the woodcut, due to the fact people in the 1500s still attributed everything to religious events. Furthermore, people again risked persecution from the Church if they wavered too far into scientific explanations. The hierarchy held the belief that people did not have the intelligence to understand science.

From northern lights to strange cloud formations, the Earth’s atmosphere keeps us pretty entertained. In the 1500s, people did not know yet about water droplets, cloud formation, or prisms. For us to apply a scientific approach, the people of Nuremberg more than likely saw a parhelion.

“Parhelion-a bright spot in the sky, appearing on either side of the sun, formed by refraction of sunlight through ice crystals high in the earth’s atmosphere.” 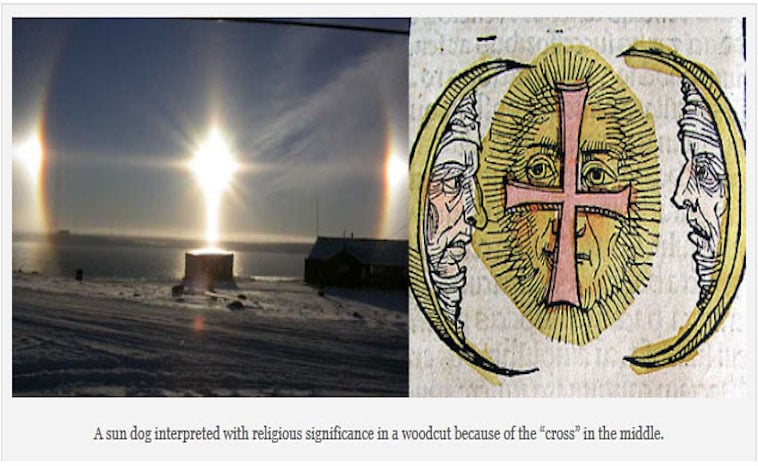 What about the black sword image? Science can explain that as well. Often these “Sun Dog” events appear with cirrus clouds. Cirrus clouds can produce images commonly known as Fall Streaks.

Fall Streaks-“Many cirrus clouds produce hair-like filaments, similar to the virga produced in liquid–water clouds, called fall streaks, and they are made of heavier ice crystals that fall from the clouds. The sizes and shapes of fall streaks are determined by the wind shear.” 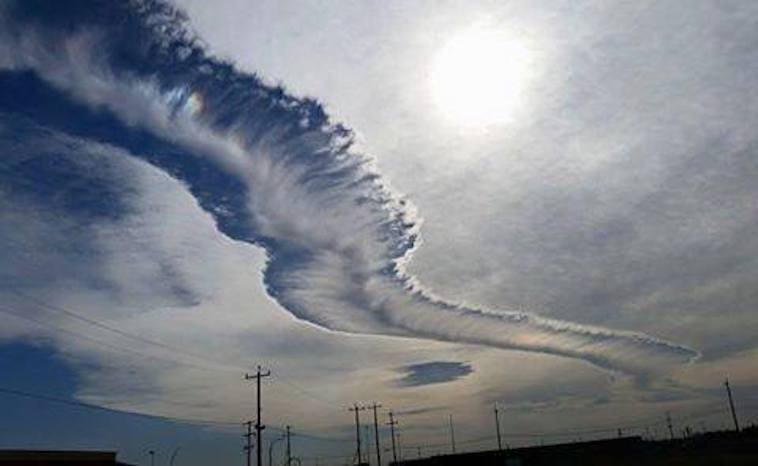 At this point, we can offer several explanations for the woodcut images. Remember, Glaser did not witness the event, so he cut based on eyewitness accounts. Regrettably, these eyewitnesses did not have the knowledge we have today. What about the spaceship that crashed into the Earth? Where did the plane parts go? What happened to the aliens on board? Again, we have to conclude that the event seems unlikely.

In this case, the appearance of a UFO battle over Nuremberg Germany seems unlikely when we apply science. On the other hand, it is quite fun to think about extraterrestrials and space battles. I think its time to watch Star Wars again.