Before the time of Polaris, our north star, another star reigned as supreme to the ancient Egyptians. Read on to learn about Khuban, the ancient north star.

Thuban or Alpha Draconis is a star located 270 light-years from Earth in the constellation of Draco, the dragon. It is bright enough to be seen by the naked eye. Around 2600 B.C., when the ancient Egyptians were building the earliest pyramids, Thuban appeared as the North Star. In the year 2787 BC is was almost precisely at the point of celestial north. However, Earth’s axis shifts in precession, and today Polaris is now the North Star.

The Importance of Thuban

To the Egyptians, Thuban was where their dead Pharaoh entered the heavenly realm and joined his compatriot gods. So they saw Draco as a hippopotamus or crocodile.

The Pharoah Khufu expected that when he died, he would join with the Sun and Thuban as well. Thus, he believed he would maintain order in the celestial realm, just as he had on Earth. To others, Thuban was the nail that held up the heavens. They regarded it as the single unchanging point in the ever-changing heavens. Old Stories pointed to Draco as the most important constellation in the sky.

In an article from Popular Astronomy, dated April 1913, Thuban was described as the following:

“Looking backward to almost 3,000 B.C., we find Thubanm, then the brightest start of the celestial Dragon, at its nearest point of approach to the North Pole. It is about ten minutes distant, nearer than our Polaris will ever be. The ancient Egyptians worshiped it as sacred to Set, or Typhon, the god of darkness.

By night and day, it could be observed by them from the bottom of the great central passage built deep into the solid masonry of the Pyramid of Khufu or Cheops of Gizeh. So aligned as to point directly to the pole. The story of this famous pyramid observatory and the uses to which it was put has been fully told by Professor Flinders Petrie, in his “Pyramids and Temples of Gizeh,” leading us to believe that for centuries, both before and after its nearest approach to the pivot of the sky, Thuban was watched as the Polaris of the Old Nile.” 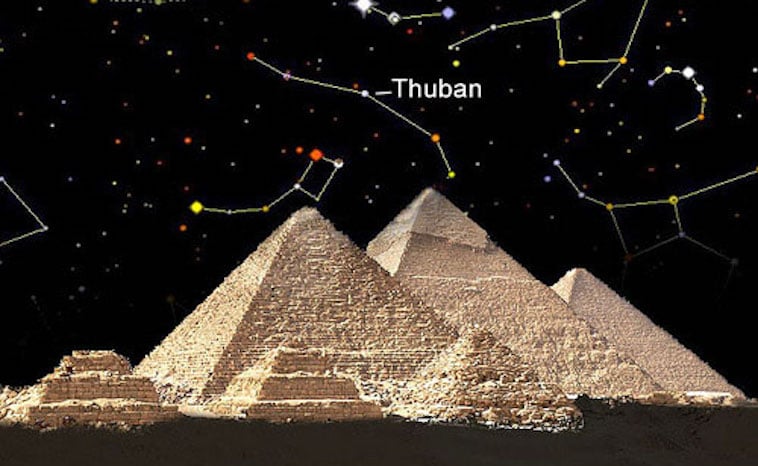 The Return of Thuban

Over the centuries, other stars took the place of the North Star after Thuban. These stars did not shine as brightly. Earth’s wobble continues to replace the North Stars. Today, Polaris occupies the place of honor. Its role in helping in navigation has helped many sailors over the years.

However, Polaris will lose its place in about 2,000 years. Gamma Cephei, an inconspicuous star in the constellation Cepheus, will become our North Star. Around 7,500 CE, Alderamin, Cepheus’ brightest star, will become the North Star. About 14,000 CE, the brightly lit Vega will replace Alderamin. As the Earth continues to wobble, Thuban will again return to its former glory North Star in the year 21,000 CE or thereabouts. 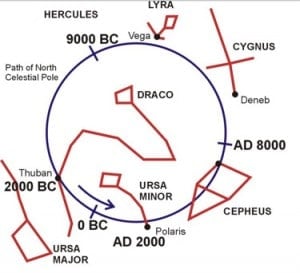