In 1977, NASA launched the Voyager 1 spacecraft as a probe to send back data from space. NASA also included a very special capsule on board in case advanced species intercepted Voyager 1. Read on to learn more about what Voyager 1 is carrying aboard their interstellar flight.

In 1977, NASA launched the Voyager 1 space probe with two phonograph records on board. These records contained images and sounds of life and culture found here on Earth. Essentially, NASA sent a time capsule into space. Who picked the sounds and images? How would an intelligent species get the images off the record? Where is Voyager 1 now?

“To the makers of music-all worlds, all times.”

The aluminum cover for the record has an ultra-pure sample of isotope Uranium-238. They included this with the hopes that a civilization encountering this would be able to determine the age of the record. 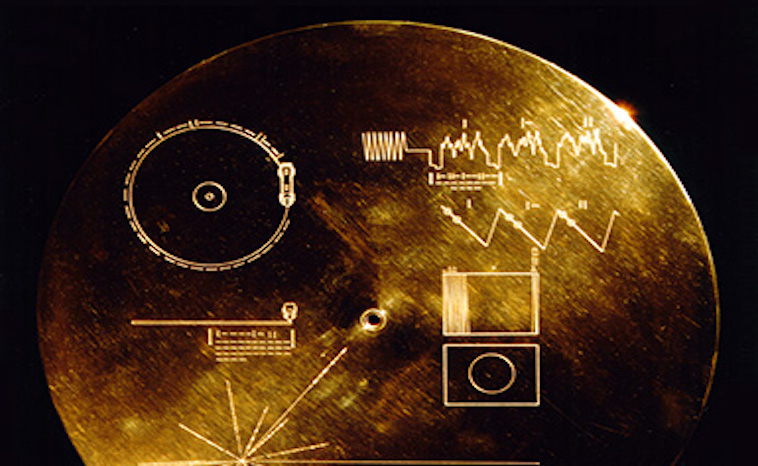 Carl Sagan chaired a committee that decided what the record would contain. Sagan and his associates assembled 115 images and a variety of natural sounds, such as those made by surf, wind, thunder, and animals. They added musical selections from different cultures and eras, spoken greetings in 55 ancient and modern languages.

Images on the Record

The collection of images includes many photographs and diagrams both in black and white and color. Therefore, they included the first images of scientific interest. These showed mathematical and physical quantities, the Solar System and its planets. In addition, it showed DNA, and human anatomy and reproduction. At the same time, care was taken to include not only pictures of humanity, but also some of the animals, insects, plants, and landscapes. Images of humanity depict a broad range of cultures showing food, architecture, and humans in portraits as well as going about their day-to-day lives.  By the same token, some images contain indications of chemical composition. Sagan ensured that all measures used in the pictures are defined in the first few images using physical references. He believed that these should be fairly consistent in the universe.

Music on the Record

How To Read The Record

In the upper left-hand corner of the record is a drawing of the phonograph record and the stylus carried with it. The stylus depicts the correct position to play the record from the beginning. The drawing indicates that the record should be played from the outside in. Meanwhile, the upper right-hand corner show how pictures are to be constructed from the recorded signals. The drawing in the lower left-hand corner of the cover shares the location of the solar system with respect to 14 pulsars. By the same token, the lower right corner shows a drawing of the hydrogen atom in its two lowest states.

Regrettably, we may never know if an intelligent species will read and listen to the Golden Records. If they do, we hope they will enjoy the images and sounds of Earth.