The Real Pictures of Space

When we look at the night sky, we see thousands of stars? When we look at pictures or videos, colors fill in the void. Do these colors exist in space or are they added by scientists? Read on the learn more about the colors of space.

Here on Earth, the stars in the sky appear black and white. Sometimes we may see something red, but for the most part black and white. Where do the colors come from? Are they indeed in space or do researchers add them to show in books and videos?

When scientists find out information relating to nebulae or planets, they work to try and show the public the object in terms they can understand. Almost every astronomical picture has been processed to some extent. Most of the telescopes used capture photos do so in black and white. To block the light from the light spectrum, they use filters to get a closer look at the desired image. Using a hydrogen alpha filter allows them to see specific photons of light.

What are photons of light? Photons make up the basic unit of all light and consist of electromagnetic energy. Photons have some basic properties and include the following:

NASA’s Solar Dynamic Observatory has many filters it can use to study the sun. From visible to ultraviolet each filter allows researchers to observe the sun. The Hubble space telescope has 80 different filters that astronomers can use when they schedule a time to use the telescope. Once they collect their data, they download the information to the Flexible Image Transport System (FITS). This system allows for the transport, analysis, and archival storage of scientific data sets. How do the colors get assigned?

Thousands of people use photoshop to edit their photos or create images. When scientists download their data, they can create images in Photoshop using special tools. Artists assign color and enhance the image. As a result, they will often use red for hydrogen elements, blue for oxygen, and green for sodium.

Another example of artists adding color involved black holes. Infrared, X-Ray and Ultraviolet light surround black holes. Due to the fact, our eyes cannot see X-Ray, Ultraviolet, or Infrared an artist has added color for us to see this object. 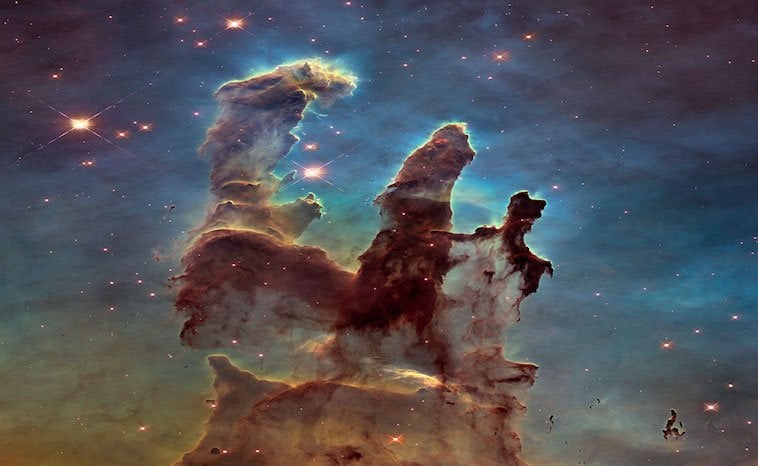 The Hubble space telescope took a picture of interstellar gas and dust in the Eagle Nebula in 1995. The Eagle Nebula can be found in the Serpens Constellation about 6,500 light years away. Named the Pillars of Creation they represent everything good about coloring space. Thousands of people have opened their eyes to the intrigue and mystery of the cosmos. Why did they name this the Pillars of Creation?

“They are so named because the gas and dust are in the process of creating new stars, while also being eroded by the light from nearby stars that have recently formed.” (Hubble News Release)

Without the aid of artists coloring the gas and dust found throughout space, we would more than likely not care. Modern times have led to our aesthetic gratification with videos and high definition images. Thankfully, artists exist to share with us these beautiful images that were once hidden from our view.