Have you ever seen a comet? Where did it come from? Why can’t we see thousands of comets passing thru the night sky? Read on to learn more about the Oort Cloud.

A comet cannot survive long in an orbit that brings it into the inner solar system. The heat of the sun vaporizes millions of tons of ices during each passage. This reduces comets to inactive bodies of rock and dust. These comets cannot last more than 100 to 1000 orbits around the sun. Astronomers calculate that even before a comet completely vaporizes from solar heating, it cannot survive more than about half a million years crossing the orbits of the planets. Therefore, their paths become rerouted into the sun or out of the solar system or colliding with one of the planets. For this reason, the comets visible in our night sky now could not have survived in their present orbits for 4.6 billion years. This means they must be a continuous supply of new comets. Where do they come from?

In the 1950’s, astronomer Jan Hendrik Oort proposed that the long-period comets are objects that fall inward. These objects fall from what has become known as the Oort cloud. Formed as a spherical cloud of icy bodies, the Oort cloud extends from about 10,000 to 100,000 AU from the sun. Astronomers hypothesize that the Oort cloud objects started as planetesimals formed in the outer solar system. Furthermore, they believe they were tossed to their current distant locations by the gravitational influence of the Jovian planets. The Oort cloud may contain several trillion icy bodies. Presumably, their distance from the sun means they are very cold, lacking comae and tails, and also invisible from Earth. 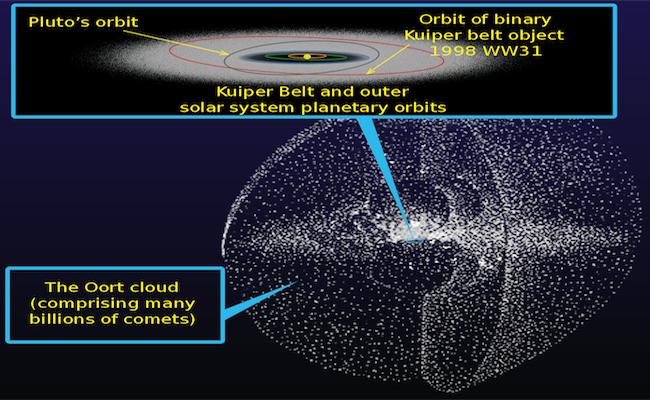 Astronomers calculate that some cloud objects can be disturbed by the gravitational influence of passing stars. This influence may cause them to fall into the inner solar system. Consequently, the heat of the sun warms their ices and transforms them into comets.

The Oort cloud reservoir spherically distributed around the sun and the inner solar system may explain the comets falling inwards. Halley’s comet may have originated from the cloud reservoir. It may have had its orbit altered by a close encounter with Jupiter.

Jan Hendrik Oort, a Dutch astronomer, made significant contributions to astronomy. The European Space Agency website describes him as, “one of the greatest astronomers of the 20th century,” and states that he “revolutionized astronomy through his ground-breaking discoveries.”

As objects fly around inside the Oort cloud they get pulled into the inner system by planetary disturbances. This wonderful discovery by Jan Hendrik Oort became a significant addition to our understanding of comets and where they came from. The next time you hear about a comet coming close to Earth, you will know that it traveled a great distance to get here. An amazing circumstance and one that adds to the wonder of our vast Milky Way galaxy.