In 2011 NASA launched the Juno spacecraft to study the gas giant Jupiter. It took five years to reach its destination. Read on to learn more about the Juno Mission.

In 2011 NASA sent the Juno spacecraft to study Jupiter. Why did NASA name the spacecraft Juno? In Roman mythology, Juno was the wife of Jupiter, and he was the king of the gods that ruled the sky and thunder. He created trouble in the clouds, and no one except for her could see him. NASA saw this relevant to the clouds covering Jupiter from view. Therefore, they named the spacecraft Juno.

The Polar Orbit of Juno

NASA refers to the Juno spacecraft as an orbiter since the spacecraft does not land. On July 4th, 2016 Jupiter started to orbit but not in the same way that previous spacecraft did. Previously, other spacecraft orbited along its equator. Juno is now orbiting in what NASA refers to as a polar orbit. This means that it is circling the planet from North to South instead of East to West. It takes 11 days for it to complete one orbit. Why do they have it orbiting this direction? Part of the reason is to prevent damage from the radiation that resides in a belt along the equator.

“On each orbit, Juno comes within 5,000 kilometers (3,100 miles) of the planet’s cloud tops. That might still sound like a great distance, but if Jupiter were the size of a basketball, the equivalent distance would be about 0.8 cm (0.315 inches).” (NASA- Mission Juno) 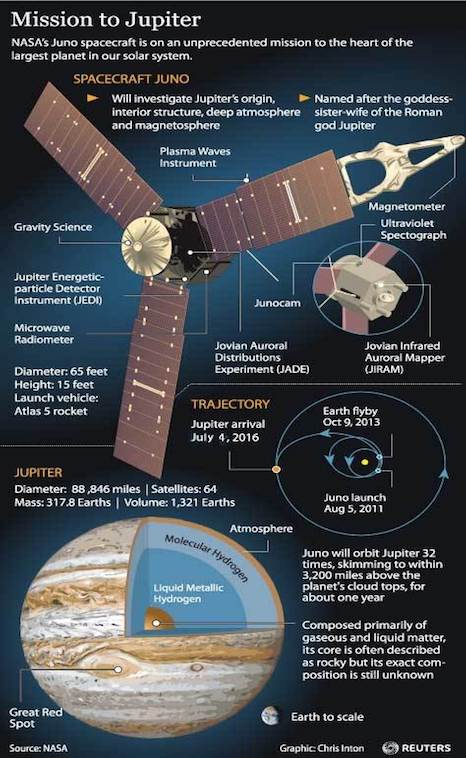 NASA sent Juno to Jupiter to answer questions and theories concerning its origins. For example, did Jupiter always occupy its current orbit around the sun or did it migrate inwards from farther outside the orbit?

Scientists have theories regarding the content and mass of Jupiters’s core. With Juno, they can measure the core and either confirm a theory or deny it. They also want to know how much water and oxygen exist. They hope to answer how the planet formed. Although they believe that the Sun and Jupiter formed at the same time, they cannot answer why Jupiter has heavy elements of Carbon and Nitrogen. Our sun does not have these elements. Where did they come from and how did these heavy elements travel across the solar system? These elements help form rocky planets like Earth, which in turn support life.

Vacuum Cleaner of the Universe

Did you know that Jupiter’s nickname is “vacuum cleaner of the universe”? Asteroids and comets that come near the planet can either be swallowed up or thrown out of the system of orbit.  Jupiters protects the other planets that orbit closer to the sun. It allows them to remain stable in their orbits which protects their climates. For example, if the Earth had an extended elliptical orbit the chances for life to exist would be prevented. This is due to the climate shift of the planet.

Researchers believe that Jupiter protects the earth by deflecting comets. At times, the gas giants send asteroids and comets into the planet. They believe that these impacts may have brought water and other elements to the Earth.