The Fibonacci Sequence Among Us

Have you ever heard of the Fibonacci Sequence and its mysterious appearance in nature? Read on to learn more about this mathematic marvel.

We add numbers to answer the question of what or how many. For example, what does 2 + 2 =? If Sally has 4 apples and Jane has 3 apples how many apples do they have together? What happens though when each number in the sequence is the sum of the two numbers that precede it? That is the Fibonacci Sequence. What makes this math formula so very special?

It sounds like a conspiracy theory. Admittedly, humans tend to look for patterns in things that may or may not really have a pattern. What we do know is that some patterns follow the Fibonacci Sequence. However, not all of nature subscribes to this pattern.

Examples of the Fibonacci Sequence:

When did man discover this sequence? Some research suggests that the Fibonacci Sequence came from the work of Leonardo Fibonacci. He was born around 1170 and originally known as Leonardo of Pisa. According to a book by Keith Devlin from Stanford University, this information is incorrect.

“Leonardo of Pisa did not actually discover the sequence, said Devlin, who is also the author of “Finding Fibonacci: The Quest to Rediscover the Forgotten Mathematical Genius Who Changed the World,” (Princeton University Press, 2017). Ancient Sanskrit texts that used the Hindu-Arabic numeral system first mention it and those predate Leonardo of Pisa by centuries.” (Devlim, 2017)

Devlin goes on to say that the sequence has existed since the beginning of time.

An Explanation of the Math

Below is an explanation of the math behind the sequence.

The Golden ratio is a special number found by dividing a line into two parts so that the longer part divided by the smaller part is also equal to the whole length divided by the longer part. It is often symbolized using phi, after the 21st letter of the Greek alphabet. In an equation form, it looks like this: 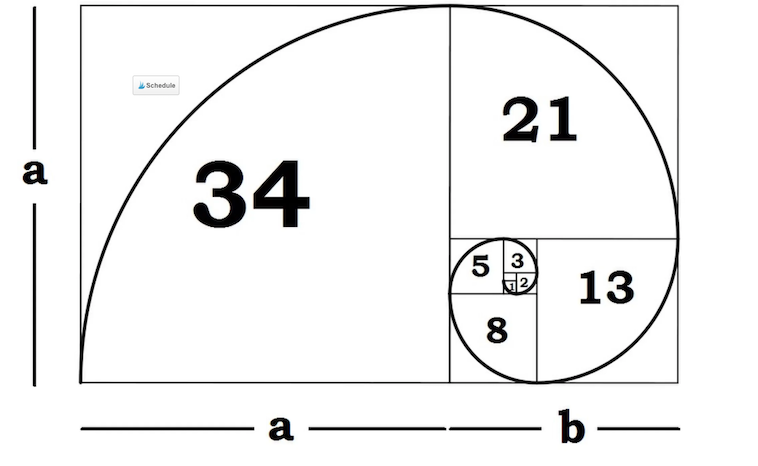 From there, mathematicians can calculate what’s called the golden spiral, or a logarithmic spiral. Its growth factor equals the golden ratio.

Do you see patterns that fit the definition of the Fibonacci sequence? Many suggest that spiral galaxies fit, but we frankly cannot measure them. At any rate, it makes for good dinnertime conversation and gives us more things to think about regarding the formation of all things in nature.