In 2019, NASA scientists released the first photo of a black hole. What does the picture tell us about black holes?

A black hole is an extremely dense object from which no light can escape. In 2019, an international network of radio telescopes called the Event Horizon Telescope project captured the image of a black hole. While it looks like a blurry photo, the image reveals a lot about these fantastic mysteries.

The stunning image shows the shadow of the supermassive black hole in the center of Messier 87 (M87). Messier 87 is an elliptical galaxy located 55 million light-years from Earth. The pictured hole is about the size of our solar system. Incredibly, it has a mass 6.5 billion times the mass of the Sun.

The first thing we notice is that the picture is the shadow of the black hole. Scientists know that these holes have a lot of debris around them. Why? They have a lot of gravity. Gas begins to form around the hole and spin into a disk. As the gas gets closer and closer, it accelerates faster and faster. Amazingly, some of the gas moves as fast as the speed of light. The speed of light travels at 670,616,629 miles per hour or 299,792 kilometers per second! As a result, a lot of friction is created. Things rub against each other at very high speeds. Therefore, an incredible amount of heat and light form in this disk.

How do scientists find black holes? Typically, these holes are surrounded by bright, hot material. They do not have radiation by which telescopes can detect them. Every possible form of light gets absorbed into the hole. The image shows the light that frames the hole.

Scientists have long believed that black holes can restructure space and time. How? Due to the intensity of its gravity. Light does not have a mass. Therefore, it should not be attracted by gravity. By definition, gravity is the force between two things that have mass.

The light flies straight through space. However, a black hole does affect the light. The hole’s gravity is so strong, that it bends the space itself. The light around the disk gets bent around the hole. The disk may present itself tilted up or down. However, it’s bending space, and the light still travels a straight path. 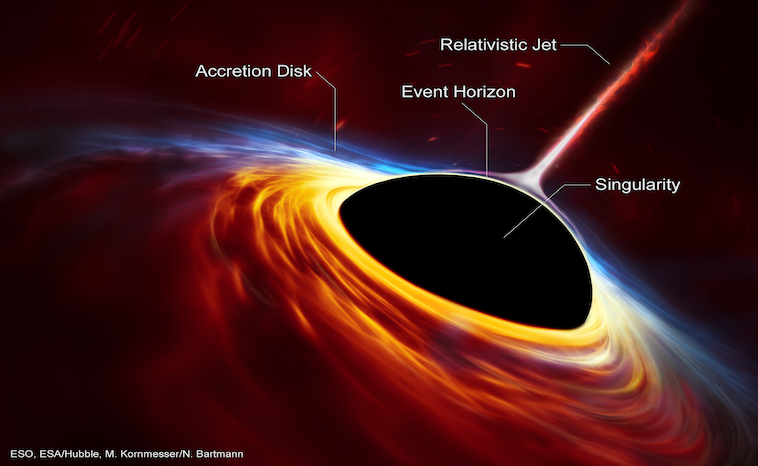 Scientists call the size of a black hole the event horizon. A black hole does not have a solid surface. However, space gets bent back into the hole. Nothing can escape the hole because space and time are bent into the hole. The event horizon of a black hole is linked to the object’s escape velocity. Escape velocity is the speed that one would need to exceed to escape the hole’s gravitational pull. Scientists believe a spacecraft would need to surpass the speed of light to escape the black hole.

The shadow of the hole is 1.5 times the size of the event horizon. The dark center in the picture is the shadow. Some light passes over the top of the hole. However, the black hole continues to bend space. Therefore, the light gets pulled around the hole, which creates the shadow.

Scientists cannot fully explain everything happening inside this black hole. Their understanding of physics remains limited. However, as more images are captured, they may soon reach conclusions about these fantastic mysteries.