NASA is once again looking for new planets with a new planet finder. Read on to learn more about the TESS satellite.

Falcon 9’s first stage came back to Earth less than 9 minutes after liftoff. It touched down on a robotic SpaceX “drone ship” stationed in the Atlantic Ocean. SpaceX has now pulled off two dozen such landings during Falcon 9 launches. The company looks develop fully and rapidly reusable rockets and spacecraft.

As the first of its kind, TESS would become an all-sky survey satellite identifying planets ranging from Earth-sized to gas giants. Furthermore, it would monitor the brightness of more than 200,000 stars. Planets that transit in front of a star will cause a temporary drop in brightness. Once this drop occurs researchers can identify features of the transiting planet.

Researchers expect TESS to catalog more than 1,500 transiting exoplanets. Similarly, they would like to see samples of 500 Earth-sized and “Super” Earth-sized planets. Aside from this, TESS will also look for small rock and ice planets. 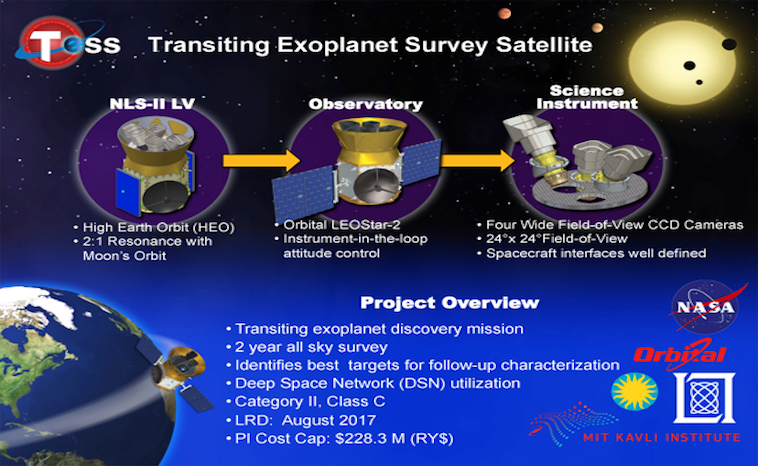 For TESS to survey two hemispheres, scientists researched the best possible orbit. “TESS needed to occupy a very particular position in space, a highly stable place that maximized sky coverage and gave the observatory a mostly unobstructed view of the cosmos, all from a low-radiation, thermally benign environment.” (NASA 2018)

Goddard engineers and The Aerospace Corporation chose a never-before-used lunar-resonant orbit. As a result, they chose a high-Earth, highly elliptical orbit. It has a period half that of the Moon’s orbital period. This means that the satellite makes a complete orbital circuit every 13.7 days.

“When the spacecraft is at the lowest point closest to Earth at 67,000 miles (17.0 earth radii), it remains well above geosynchronous orbit 22,236 miles above the equator where most communications satellites operate. Still, at this lowest point, or perigee, TESS will orient its dish antenna to Earth and transmit data to ground stations below, a process that will take three hours. At its highest point, or apogee, some 232,000 miles above Earth (58.7 earth radii), it avoids the hazards posed by the Van Allen radiation belts, which extend from about 621 to 37,282 miles above the surface.” (NASA 2018)

Why Use That Orbit?

Why did NASA choose this type of orbit? Perturbations from the gravitational tug-and-pull exerted on spacecraft by the Moon and Earth are roughly zero. TESS’s apogee is about 90 degrees with respect to the Moon. As a result, these highly elliptical high-Earth orbits offer long-term stability for spacecraft. After TESS reaches its trajectory, limited station-keeping maneuvers are required to keep it in place. Without propellant, to power thrusters, this type of orbit will work out well.

We will follow this new satellite with excitement for any new discoveries. Each year NASA collects more information about space increasing our knowledge and desire to know more.